Mackintosh Curator, Peter Trowles, discusses his research into the GSA Archives and how this unique collection of records and artefacts that tracks the history of the School can, and is informing the restoration of the Mackintosh Building. 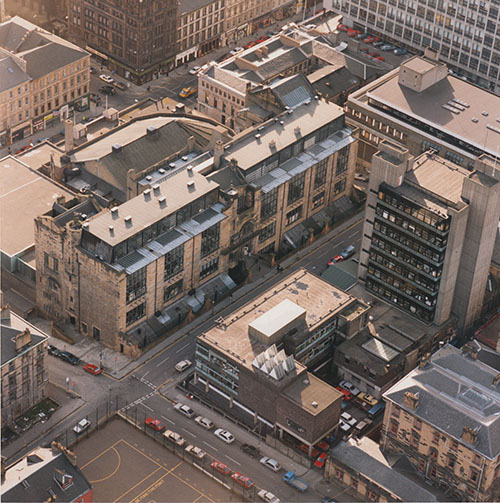 Photograph of the Mackintosh Building from the GSA Archive (Archive reference: GSAA/P/7/7)

Eighteen months on from the tragic fire that destroyed much of the western half of the Mackintosh Building, Glasgow School of Art remains committed to the task of restoring the building as sympathetically as possible. However, trying to differentiate between what elements of the building were original (and therefore more of less to Mackintosh’s own design specification, in terms of both form and function), and what were mostly modern interventions added at some point in the building’s history (i.e. post-Mackintosh) has, on occasions, proved to be surprisingly complicated.

The question of authenticity remains key. The task of replicating the building exactly as it was in 1900 or 1910 is understandably impossible to achieve; the need for the building to operate as a fully functioning, working art school in the 21st century is clearly at odds with the technology and operational needs specified in the original completion brief set in 1896. But at what point in the building’s history (a building that is now well over 100 years old) is the most authentic?

A new external window added to the east façade on Dalhousie Street to provide improved lighting to the former Animal Room was overseen, in part, by Mackintosh himself but wasn’t installed until 1915, five years after the building’s completion. Such an addition is clearly not part of the ‘original’ scheme but is rightly viewed today perhaps as being integral to the Mackintosh design. However, additions or amendments made to the building in subsequent years (and without any Mackintosh involvement), how are they to be seen? Just because the mezzanine floors added to the north-facing studies in the 1960s aren’t original features, is that justification enough to have them all removed?  The mezzanines were clearly added to provide much needed additional space and 50 years on the pressure on space, or more correctly the lack of studio space has never been greater. So do the practical needs of the School outweigh the desire for the building to be returned, as close as possible, to what it was like originally?

Despite being the subject of extensive research centred round its design and subsequent construction, almost nothing is known of how the Mackintosh Building has been amended and modified since its completion. Up until now, no timeline exists of what changes have been made to the structure of the building (both internal and external), when those changes were made and importantly why they were made in the first place.

With an extensive and almost complete archive at its disposal, the School is confident that the answers to many of the questions being posed by the project architects in terms of what is known about the building and importantly ‘what is not’, can be found; it just requires time and effort to work through a considerable amount of archival correspondence, much of which has never been looked at in any great detail.

An initial examination of the GSA Governors’ committee papers (covering the period 1909-1949) has identified a number of key amendments to the building and these have been collated into the following document: http://radar.gsa.ac.uk/3777/1/GSA%20Governors%20minutes%201909-1949.docx

Extract from Meeting of Joint School and Staff and Finance Committees 17 May 1946 (Archive reference: GSAA/GOV/2/19)

Understandably perhaps, most of the more substantial changes to the Mackintosh Building have been brought about by necessity such as the need for rewiring, repairs to the roof, and the replacement of windows. Elsewhere, improvements to the operation and use of the building have resulted in changes to a room’s function and/or purpose and the need for new internal, doors, walls and even staircases to be considered.

Further investigation into a number of the key ‘headline’ alterations to the Mackintosh Building is still to be carried out but it is hoped that additional evidence, held elsewhere in the Archive will be forthcoming and this in turn will help to inform the process of rebuilding ‘The Masterwork’.