And Now, The BBC Genome Project 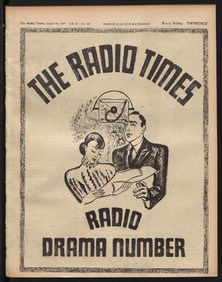 Recently the BBC have launched an exciting online project that catalogues the listings information printed in the BBC Radio Times from 1923 to 2009. Created by the BBC Archive Development in conjunction with BBC Research and Development, each page of the Radio Times since 1923 have been scanned and processed through optical character recognition systematically  to extract information – such as the title, time of showing, synopsis, contributors and so on – automatically.

Beginning in November 1922 the British Broadcasting Company published its first Radio Times on the 28th September 1923 after  the Newspaper Publisher’s Associated refused to print the BBC programme details without payment for the advertising. Since then, the Radio Times has continually published the BBC listings missing only 8 issues in its lifetime. Documenting the changes in programming, and the shifting dynamic between TV and radio this resource provides a useful starting point to investigate the role of media and the history of a publication so widely used and known in Britain.

As optical character recognition can only accomplish so much the project is giving users the opportunity to edit, correct and add to existing entries with information that may not have been included in the listing generally (for example, if a programme was cancelled or relpaced) in order to create a far more comprehensive and contextualised record.

Interestingly the addition of information by external users has become a popular method of gathering data that may simply not be held within the record, and of highlighting resources in different ways to make them more accessible to researchers. This can be seen in the recent project by the National Archives, Operation War Diary, that was launched this January to mark the centenary of the First World War (Operation War Diary – you archive needs you!), a project that encourages users to tag the data they discover within the entries, such as names, dates and places in order to make it easier for subsequent users to find.

Find the BBC Genome project here and see if you recognise any of these issues!