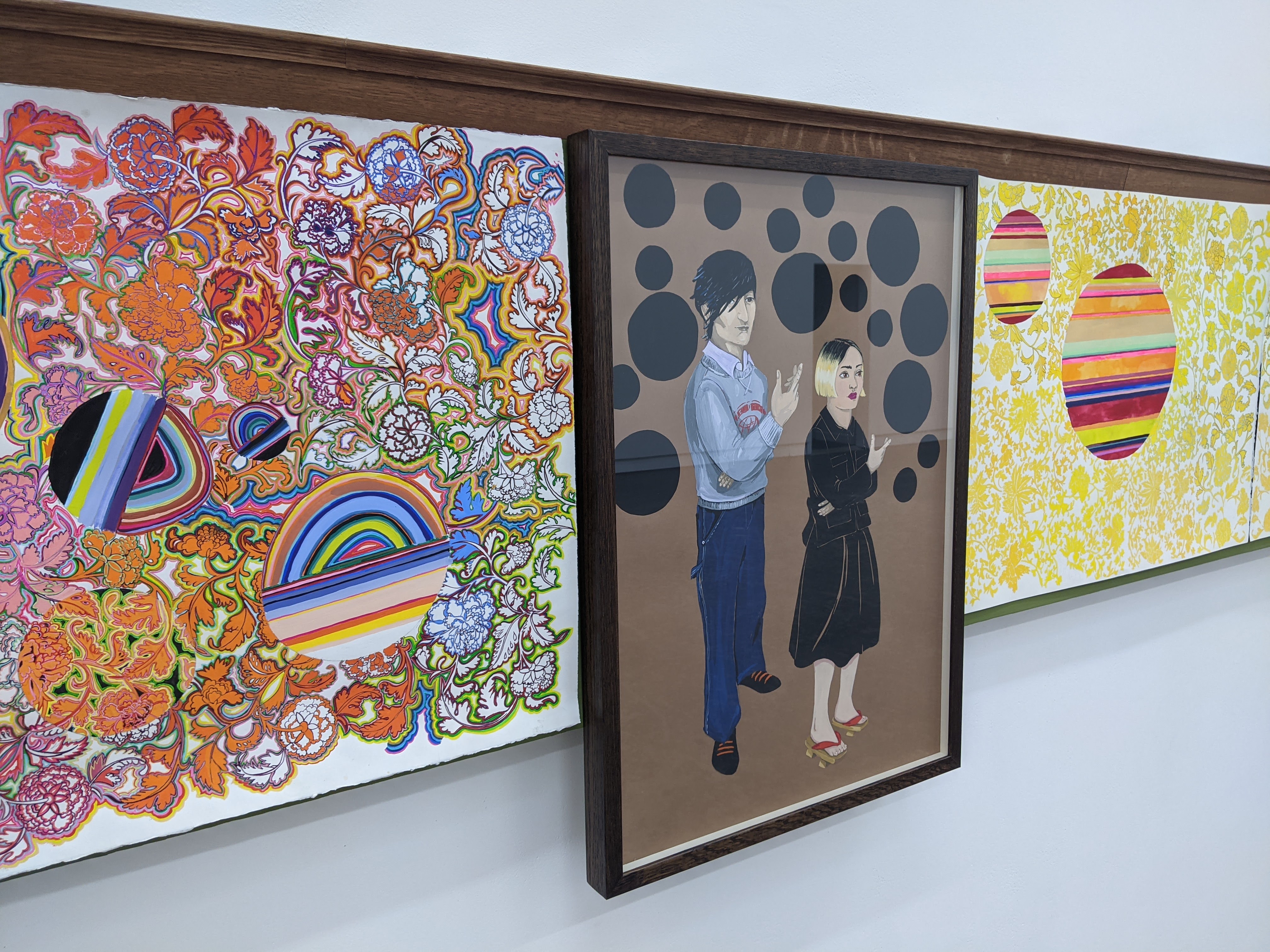 There are just a few days left to see ambi, a partnership between Glasgow’s Centre for Contemporary Arts (CCA) and GSA, which runs until this Saturday the 29th of May at 6pm. The artists were inspired by a broad range of material from GSA Archives and Collections. Book your free tickets here or read on to find our more about the exhibition and the work of the contributing artists!

The title of the exhibition, ambi, is Punjabi for the pattern known in Scotland as Paisley Pattern. ambi also means ‘both’, allowing for multiple narratives and acknowledging that these works from the archive have diverse origins and appropriations.

This exhibition, takes works from the textiles, fashion and costume holdings at The Glasgow School of Art Archives & Special Collections as its starting point. The GSA has specially commissioned four Scotland and UK-based artists and designers Rabiya Choudhry, Fiona Jardine, Raisa Kabir and Hanneline Visnes. Each responds to specific textiles holdings or the archive in order to track its histories in order to present a new story or work from it.

Rabiya Choudhry is investigating the Paisley Pattern, (which historically has its origins in Ancient Babylon or Iran) with its unique teardrop or ‘boteh’ form. The word ‘boteh’ is Persian for ‘shrub or cluster of leaves’, and the seed-like shape of Paisley pattern is purported to represent fertility. Paisley pattern also became a bohemian emblem in the western world’s appropriation of it. Choudhry has collaborated with a textiles specialist to make small textiles from a series of new patterns she has designed which were printed at Centre for Advanced Textiles (GSA).

Pursuing a line of research connected with the manufacture of carpets in the late 19th and early 20th century, Fiona Jardine has considered the relationship between space, place and labour, selecting objects for display that suggest passage between hand-plaited rush, hand-painted designs on paper and machine woven ‘tapestry’. Jardine’s online artist talk ‘The Congest & The Square: Land, Labour and a missing carpet’, which took place 26 Feb 2021, plays both in CCA1 and on CCA Annex. It looks to political and cultural dynamics that led, in the late 19th century, to the establishment of an enterprise producing hand-knotted carpets in Killybegs, Donegal.

For her new work, Gather your spools, let your hair down for me. Gently. Here. Undo., Raisa Kabir presents a moving portrait and sculpture responding to the textile geographies of labour between Kashmiri woven shawls, Paisley, Scotland, Textile Archives, and South Asian diasporic migration and displacement.  The sculptural weaving, which features in the moving portrait, acts as a consequent reminder of the colonial imposed borders and the ongoing conflict between India and Pakistan.  The work can also be viewed on CCA Annex until the end of the exhibition.

“Gather your spools, let your hair down for me. Gently. Here. Undo.” by Raisa Kabir. Image copyright Alan Dimmick.

“Gather your spools, let your hair down for me. Gently. Here. Undo.” by Raisa Kabir. Image copyright Alan Dimmick.

Hanneline Visnes selected the work of Dorothy Carleton Smyth [1880-1933] from the archive. The GSA Archives & Collections holds a series of costume designs by Smyth for Shakespeare’s Macbeth and Wilde’s Salome. In 1914, Smyth became Principal of Commercial Art at Glasgow School of Art, teaching miniature painting and the history of costume and armour. In 1933, she was offered, and accepted, the post of Director of the Glasgow School of Art, but tragically died of a brain haemorrhage, aged 52, before the appointment was made public. Visnes responds to the costumes and characters created by Smyth in a series of new gouache drawings. Force (2018/2021) forms a frieze in CCA3 and considers the workforce of the Glasgow School of Art, in terms of the generations of teachers who have been at the art school and their continuing belief in culture, education, and the force art can hold in the world and human life. Visnes combines figures and pattern in her work, in order to see how they can exist together in terms of flatness and volume within the page. Her wide ranging choice of palette aims to converse with the luminosity of colour in Smyth’s illustrations.

This exhibition is co-curated by Jenny Brownrigg (GSA) and Sabrina Henry (CCA). ambi occurs 39 years after The Third Eye Centre’s The Paisley Boteh exhibition, which exhibited a collection of Kashmir, Scottish, English and European shawls to show the genesis of the ‘Paisley’ design from textiles in the Middle East and India. The Paisley Boteh was based on a collection of textiles belonging to Ron Simpson. In remembrance of Chris Carrell (1941-2021). Director of the Third Eye Centre in 1978 – 1991.