If you’ve seen a concrete church or a school in the west of Scotland, there’s a good chance that it was designed by one of Glasgow’s pre-eminent architectural firms. From 1927 to 1987 Gillespie, Kidd and Coia Architects created designs for schools, churches, offices, hospitals, houses, universities and more, both in Scotland and beyond.

The Gillespie, Kidd and Coia archive is held by The Glasgow School of Art Archives and Collections and includes plans, photographs, office papers, correspondence and files.

For more than a year, archives support assistants Tilly and Lucy have been spending one day a week going through the thousands of GKC architectural plans. Their task was to catalogue them all to item level, so this meant adding individual numbers to every single drawing and updating the catalogue so the descriptions and numbers match up. 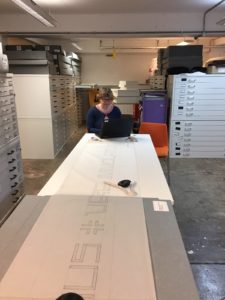 – re-filed items that had ended up in the wrong folders

– re-labelled some items that had been erroneously identified

– attached new labels to all the folders and drawers

– made lists of the contents for all the drawers

The GKC collection is held in about 15 plan chests, each with seven drawers, each holding 15-20 folders, each containing around ten drawings. There are also tubes stored outside the drawers containing the larger drawings and plans.

Which means Tilly and Lucy have looked at and labelled approximately 15,000 drawings!

So what did you think of the collection?

Tilly: I was immediately struck by the strength of design that was carried across near enough the entire period they were operating. It was very interesting to see this develop, and to note their wholehearted embracing of precast concrete as a building material. So many of the projects look very typical of the era. Some that particularly come to mind include the Housing development in Kildrum, Cumbernauld (GKC/HDC, from 1956 – 1959) that incorporated the giant 16 storey tower blocks and playgrounds made from concrete that are archetypal of city housing developments of the time. 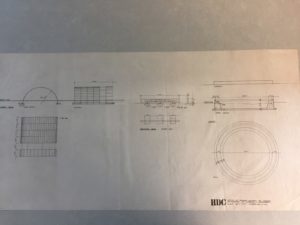 Black and white sketch depicting the view of Tower Block from South looking over Kildrum 5 development, Fig. 1. This shows a tower block in the background rising above residential buildings in the foreground, with a road and car parking area.

The designs for the Lawns Halls of Residence for the University of Hull (GKC/HRHU, from 1961 – 1979) also completely encapsulate the unapologetic 1960s/70s university architecture with their angular, almost spaceship-like shapes. 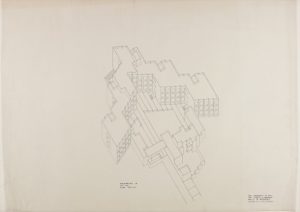 Hand drawn plan showing the axonometric view of One Hall. The Hall is a slanted diamond shape, the top half comprising windowed apartments. The bottom half shows a series of multi-level platforms.

Lucy: There’s a huge difference in scale between projects; from an extension to a single house to ambitious designs for entire neighbourhoods, or from binsheds to huge student halls.

It was also interesting to see the designs for projects which never happened, like a multi-tier shopping centre with restaurants, a bank, a garden and a tower block to go at the top of Buchanan Street. And of course the Glasgow city centre heliport (GKC/AT-GL) which looked like an amazing idea and would have been an even more amazing structure! 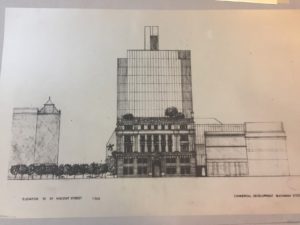 Black and white sketch for a proposed development of a tower block to contain offices, shops, restaurants and a bank at the top of Buchanan Street circa 1968-1972. This shows the elevation to St Vincent Street, with the modern tower block rising behind a much lower Victorian building.

Handdrawn plan with two elevations of the flight centre showing that it had three levels and a flat roof, which was for the flight deck.

I was also a bit startled that they did the Buck Rogers Burger Bar (GKC/BRBS) which many Glaswegians will remember fondly from the early 1980s.

Hand-drawn plan showing the layout of the burger bar into two large rooms for diners, and other facilities such as the toilets and kitchens.

What were your favourite things?

Tilly: My favourite things have to be the small, almost inconsequential aspects that the architects took time to design. These ranged from lampshade designs for Bellshill Maternity Hospital (GKC/MHB, from 1953 – 1974) to the armchair designed for the Curate’s sitting room for the Church of the Sacred Heart, Cumbernauld (GKC/CCU, from 1960 – 1972). 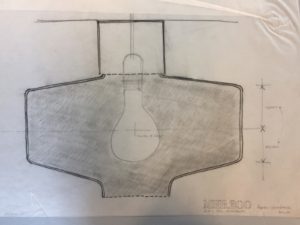 Hand drawn black and white design for a light fitting. The light fitting comprises a shaded rectangular shape encasing a downward pointing lightbulb attached with a cable to the ceiling. 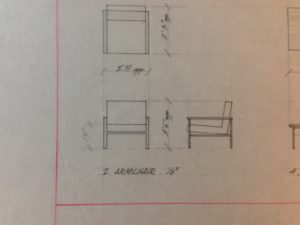 A cropped image from a hand drawn design depicting three perspectives of an armchair: front view, side view, and top down.

There are also countless examples of excellent typography. 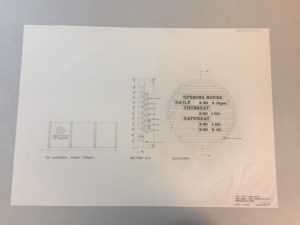 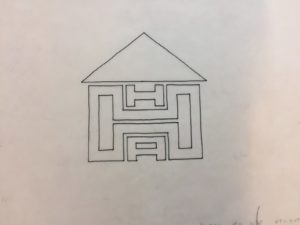 Cropped image depicting logo design in the shape of a house.

However, my favourite things have to be the accidental and incidental marks made by the architects on the plans. These coffee stains (sometimes rings left by a mug, sometimes the remnants of an entire cup being knocked over), cigarette burns, and doodles give us a real insight into the characters who were behind the designs. And also remind us how human error hasn’t really changed over the last 50 or 60 years. 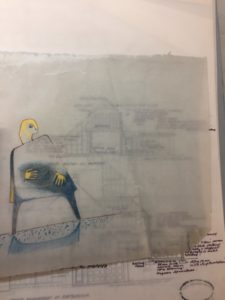 Cropped image depicting a colour drawing of an abstract standing figure. The edge of another drawing can be seen underneath. 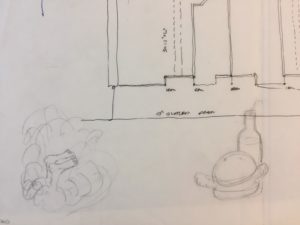 Lucy: I loved the drawings for Stantonbury, which was going to be a district of Milton Keynes. The drawings show people in the houses living ‘typical’ 1970s New Town lives – walking the dog, out with the baby in pram, hanging the washing on a whirligig and enjoying the garden. It’s all very jolly and optimistic. (GKC/HO-MK) 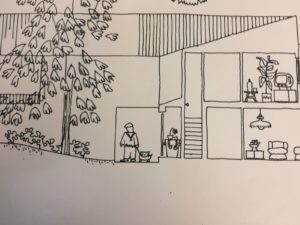 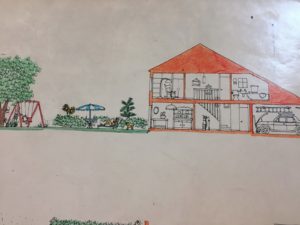 Tilly: I was most surprised by the plans for Glasgow University (GKC/GU, from 1946 – 1978) that included plans for an ‘Animal House’. The drawings depicted cages for cats, ‘terrier-type’ dogs and greyhounds, shedding light on some grizzly aspects of the scientific research that went on in the 1940s at the university. This is certainly an aspect of history that I didn’t expect to be confronted by while sorting through the plans. (For transparency, here is a link to the University’s current animal research policy: https://www.gla.ac.uk/research/strategy/ourpolicies/opennessinanimalresearch/animalresearchpolicy/ ). 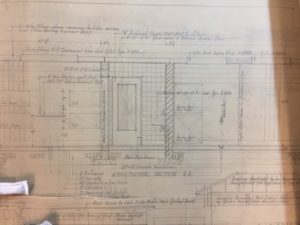 Lucy: It was interesting to see things that gave historical insights. For example, there was a plan for Education Offices in Park Circus in August 1939 – just before the Second World War was declared – to install an air raid shelter (GKC/OF-PC). 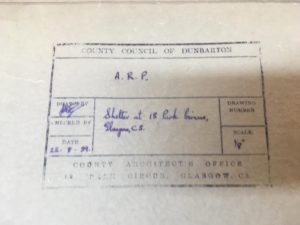 Plans for Bellshill Maternity Hospital from the mid 1970s (GKC/MHB) included a Civil Defence wing, which I think was a Cold War precaution. 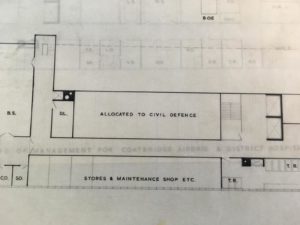 Hand-drawn plan showing two long rooms each side of a corridor with labels which read ‘Allocated to civil defence’ and ‘Store and maintenance shop etc.’

On a lighter note, in the refurbishment of some Maryhill tenements, the tenants were offered a choice of colours for their new bathroom suites – would you have chosen burgundy, avocado or Pacific blue? (GKC/HO-MA) 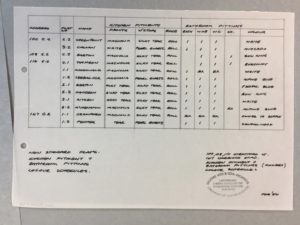 Did anything make you laugh?

Tilly: Definitely some of the illustrations used in the Stantonbury 6 (GKC/HO-MK, from 1970 – 1982) designs were quite amusing. Depictions of residents driving home with pipe in mouth, their dog sunbathing in the garden, and children playing on swings have been drawn in a pretty amusing style.

Also, some of the details added into the axonometric elevation of a student bedroom (GKC/CO-CAM, from 1974 – 1981) turned out to be quite risqué! 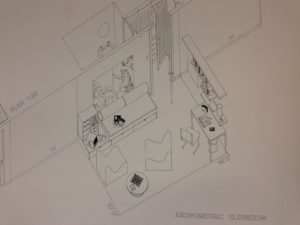 A black and white axonometric elevation of a typical student bedroom.

Lucy: The plans for The Lawns student residencies at the University of Hull (GKC/HRHU) included a cocktail bar and a fish and chip bar, which was quite exciting. Sadly, in the very next plan we looked at, the fish and chip bar was scored out and ‘snack bar’ was pencilled in instead. So it was a short-lived dream but at least they still had their cocktail bar!

Closeup of a hand-drawn floor plan showing the floor layout

However, although the physical sorting of the plans is now complete, work on the Gillespie Kidd and Coia archive is not over yet. While they are working from home due to the COVID-19 pandemic, Lucy and Tilly have been sorting through digitised images of the plans to match them with their archival description on the online catalogue. This will mean that the images will be able to be viewed online by researchers.