Conserving the Collections: An Update

I’m pleased to share an update on the status of the conservation of material from the Archives and Collections that was affected by the fire in GSA’s Mackintosh Building in May 2014.

As part of the HLF-funded Mackintosh Conservation and Access Project, the majority of GSA’s textile collection had been conserved and beautifully housed in bespoke conservation grade packaging. When the fire happened in May 2014, this packaging did its job of protecting the majority of the textiles inside from water damage, but unfortunately this packaging bore the brunt of the damage and ultimately had to be discarded. Since then, we have created a new modular storage system for our textiles, which is soon to culminate in the install of a set of bespoke plan chests in which we will house the folders, trays and rolls of textiles. 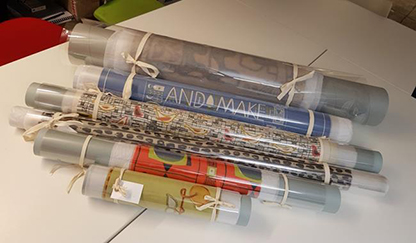 Thanks to the robust packaging that the textiles were housed in at the time of the fire, the majority of the textile collection requires no remedial conservation. Any items which showed signs of discoloration or dye run were surveyed by textile conservators to assess if any conservation treatments were possible. In the end, only 31 of the 500 or so textiles in the collection required treatment. The second and final batch of textiles is currently with Tuula Pardoe, Textile Conservator at The Scottish Conservation Studio for treatment with a view to completion by the end of 2019.

In addition, as you’ll know from previous blog posts, some of the t-shirts from our textile collection have been undergoing conservation and repacking with the students at The University of Glasgow’s Centre for Textile Conservation. This work has now been completed and the t-shirts have recently been returned to us.

At the time of the 2014 fire, some objects from our holdings were stored in a storeroom located above the Mackintosh Library, and as such, some suffered damage. The damage was mainly heat damage – metal had warped, ceramics had cracked, or tissue paper and bubble wrap packaging had become fused to the objects. Will Murray, Object Conservator at the Scottish Conservation Studio was tasked with conserving the damaged objects, and I’m pleased to say that all of the conservation work that was possible has now been completed.

The items treated included an interesting bowl by Alec Leckie (NMC/833). Rather than try and remove the fused-on packaging, we’ve decided to preserve and consolidate the damage, which is now part of the story of the object, and in doing so, while still fragile, the object is now able to be used and consulted as a resource once again.

Another item to undergo treatment was a repousse panel designed by Margaret Macdonald (MC/F/105). This was all that survived from a writing desk designed by her husband Charles Rennie Mackintosh for the Davidson family’s house Gladsmuir in Kilmacolm. The metal had become extremely disfigured, but some cleaning and flattening has been possible and the panel has now also been attached to a Perspex mount meaning that it can be more easily handled or displayed.

A decorative wrought iron panel by the Carron Company (NMC/515) which had been donated to GSA in 1913 had got wet and had become extremely rusty as a result. Will has thankfully been able to remove all the rust and the item now looks as good as new.

GSA also holds an interesting set of framed teaching aids from the 1940s (NMC/1622-1928 and NMC/1639-1641), which includes examples of metalwork, engraving, block printing, and enamelling. This set unfortunately suffered some water damage, but the teaching aids have now been restored, elements which had fallen off have been reattached and new UV glass has been added so that the set can at some point be put on display without fear of damaging the objects behind the glass.

Meanwhile stone and sculpture conservator Graciela Ainsworth’s team have conserved a sculpture called Mother & Child (NMC/271) by John Knox from the 1930s which had suffered water damage. The Portland stone is now much brighter in colour, and overall the sculpture looks much cleaner.

Quite a lot of the material requiring conservation had been out in our reading room in the Mackintosh Building at the time of the fire (either because it was being worked on, or because it was out for visitors who had made an appointment to view the item). Helen Creasy, Paper Conservator at the Scottish Conservation Studio, has been working on this material and the treatments have included repairs to holes and tears, flattening, stain removal, and cleaning – as you’ll see from the images here, the results have been incredibly satisfying!

One particular item presented unique challenges in terms of conservation: a design for a GSA diploma, by Jessie Marion King (JAC/132). This item, on tracing paper, was incredibly damaged due to the item getting wet, then shrinking as it dried, which created huge tears. Helen has been able to conserve the item to reduce these tears as much as possible and flatten the item to make it much less wrinkled. I’m sure we can all agree that the design is looking much, much better following conservation! 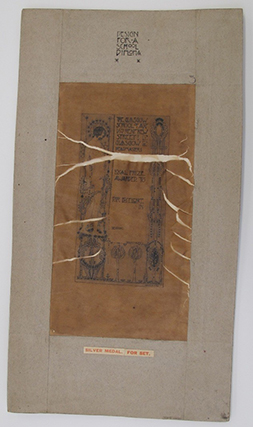 Some of the other paper material that was damaged included student work by the artist Fraser Taylor (DC 089). Helen has worked closely with Fraser to make sure material that had been separated was reattached in the correct position and in general to ensure Fraser’s wishes were met in terms of conservation.

Emma Fraser, of the Book and Paper Conservation Studio in Dundee has also completed the conservation of two bound volumes, one a very large 19th century German weaver’s notebook (NMC/1594), and the other a small interior design student notebook from the 1980s by Fiona Paton (from DC 083). Both are now much more stable and able to be consulted once more.

So by and large the majority of conservation is now complete! Thank you to all the conservators who’ve been involved in this mammoth task. We’re delighted to have the majority of the material back with us and available for users once more, and are looking forward to having the remaining textiles back soon too.

Lastly, I’m also excited to reveal that for the last few years we have been making a series of films about the various aspects of our fire recovery project. Some of these films include footage of conservation activities and interviews with some of the conservators who’ve been involved, so watch this space for more from behind the scenes!

PrevPrevious ArticleThe Final Mount Down!
Next ArticleUpdate on our Textile StorageNext