The Unexpected Complexity of the Art of Restoration

Tagged with 99% Invisible, Glasgow School of Art Archives and Collections, Mackintosh Building, Stirling, Stirling Castle, The Great Restoration, The Unexpected Complexity of the Art of Restoration 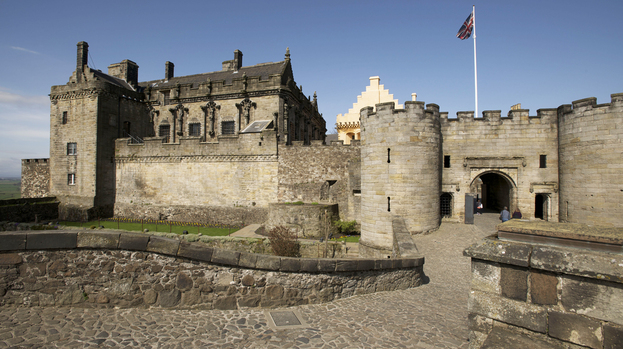 As the GSA Archives continues to be mined for small facts, documents and plans that may be useful in the process of restoring the Mackintosh Building (please see Informing Restoration: GSA Archives and the Mackintosh Building for further information), the more subtle complexities involved in restoring a beloved building are already becoming apparent.

The Mackintosh Building has resided on Renfrew Street now for over 100 years and has become an integral aspect of the city and the local community. There are entire generations of families recorded within our archives that have attended the GSA, shared the same work spaces and developed shared memories of this one building. This means that in the act of restoring the Mackintosh Building, it is not only important to consider aspects of authenticity, but to consider the impact of the finished restoration on the community which the building serves. 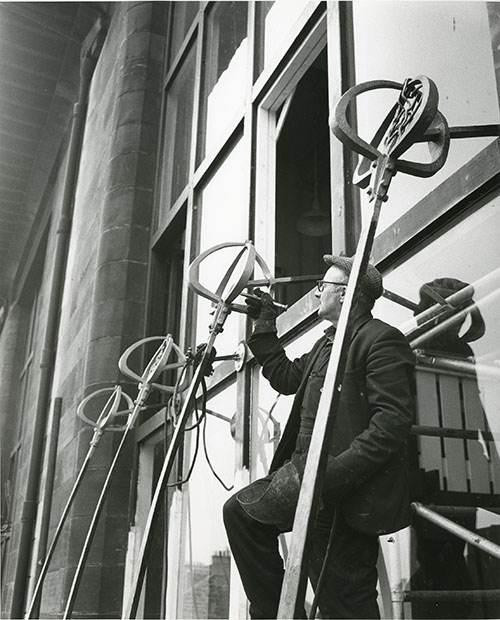 Photo of a workman repairing a window bracket on the front facade of the Mackintosh Building (Archive reference: GSAA/P/7/99)

In 1991 Historic Scotland – a government organisation responsible for safeguarding Scotland’s historic treasures – took over guardianship of Stirling Castle, and began the difficult task of restoring the Great Hall. At the time, this was quite a task. From 1800 to 1964 the Castle had been controlled by the War Office and had been used to house the Argyll and Southerland Highlanders. During this time the Great Hall had been used as barrack accommodation, which meant there had been many alterations made to the building to increase its housing capacity (the addition of several floors for example). After the War Office and the Highlanders left the entire hall was gutted and left as an empty shell.

As Historic Scotland took over and begun to conduct research into the records of the Great Hall to try and discover what it had been like over 300 years into the past, they found very few records that provided accurate measurements or representations of the building. While the records were not exact for this period, there was one astonishing discovery that Historic Scotland made on the Great Hall itself. It was the presence of lime wash. Lime wash is pure lime that also contains earth-based pigments and is applied to buildings to protect the stone work from the elements. However, with Stirling Castle they found a significant yellow ochre layer of this lime wash, and this significant yellow ochre was very intentional. On top of the hill where Stirling Castle sits, a bright sunny yellow Great Hall was placed to signify that this was the home of a king. 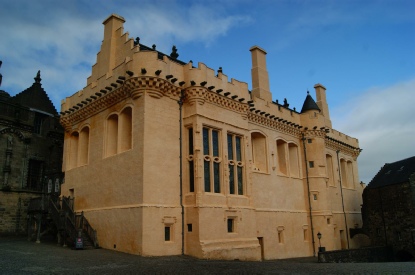 When Historic Scotland completed the restoration of the Great Hall to this eye-catching yellow, and it was unveiled to the public, the occupants of Stirling were not happy. This image of the Castle jarred with the community’s expectations and understanding of what the Castle looked like in the past, and despite the overwhelming evidence that this is how the Great Hall was presented over 300 years ago, the restoration caused controversy. To hear the full story of this restoration, the responses of the public and directly from Historic Scotland, listen to The Great Restoration by 99% Invisible, a particularly fine podcast that talks about design, architecture and the everyday activities that shape the world we live in.