Our Mackintosh Curator Peter Trowles, looks at the work of GSA alumna Dorothy Doddrell on the GSA Roll of Honour and other war memorials.

Although the awarding of a recent grant from the War Memorials Trust guaranteed the restoration of GSA’s First World War Roll of Honour in time for the centenary of the Great War in 2014, it has also focused attention on the Roll itself and those it commemorates.

On-going research by the Archives and Collections Centre and particularly by Maja Shand, GSA‘s Skills For the Future Trainee continues to unearth some interesting findings.

It has long been believed that the 404 individual names on the Roll of Honour reflected a full list of staff and students who had undertaken military or military-related service (such as nursing etc.) during the period 1914-1918. In the early years of the war, GSA went to great lengths to list (in its Annual Reports) those who had answered the Government’s call to arms and the assumption has always been that this information was already in place when the School finally agreed (in late 1920) that some form of memorial be commissioned.

However, a recently discovered advertisement placed in the Glasgow Herald on 1 November, 1920 shows that the School required the support of the wider public (or at least the readership of the Glasgow Herald) in collating the necessary information in order to deliver a suitable memorial.

“THE GLASGOW SCHOOL OF ART.  ROLL OF HONOUR.  INFORMATION is REQUESTED for the COMPLETITION OF THIS ROLL. RELATIONS or FRIENDS of those WHO HAVE FALLEN and STUDENTS WHO HAVE SERVED are requested to SEND FUL L INFORMATION at once including full NAME, ADDRESS, RANK, SHIP or REGIMENT, HONOURS Etc. to the SECRETARY, SCHOOL OF ART, 167 RENFREW STREET.”

Not surprisingly, such an approach exposed the School to creating a memorial that would inevitably be incomplete, and so it has proved. There is evidence to show that a number of established artists who passed through the School in the years before the start of war fail to get a mention on the Roll. Meanwhile, Maja Shand had identified individuals whose military service came first, only to attend GSA as students after the cessation of hostilities, yet they get listed. Such discoveries only reiterate that the pulling together of a definitive list of all those who could, by rights, have been included on the Roll of Honour when finally produced in 1925 was unachievable and 90 years on that task remains impossible today.

In research undertaken so far, the background to the commissioning of the Roll of Honour itself is still unclear. Whether a competition was ever announced for the project is unknown and the reasoning behind the extensive delay in the completion of the project (over 4 years) has yet to be identified.

Dorothy Doddrell, the former student chosen to design the Roll of Honour, attended GSA between 1912 and 1918, and then for another two years, from 1922-24. In 1914-15 she took Design classes and it was during this year that she was selected to design The Glasgow School of Art’s Roll of Honour to commemorate staff and students who served in the First World War. She also received a Design and Decorative Art Minor Travelling Bursary of £8 6s 3d this year and is recorded as helping with the tea room at the Belgium Tryst in January 1915. In 1915-16 she took day Design cIasses and is listed in the records as an Art Student. She was successful in getting another Design and Decorative Art Minor Travelling Bursary, this time for £8 10s. In 1916-17 she took Life classes both during the day and in the evening, and was awarded The Glasgow School of Art Diploma in Design and Decorative Art. She also won second place – awarded for the greatest progress made during the session – in the Design Room Sketch Club competition presented in the name of Professor R Anning Bell. Even though she had graduated, in 1917-18 Dorothy Doddrell continued to attend day Design classes. She was also one of three women to win a “Maclaren” Bursary. No specific sum is mentioned but the bursary was the outcome of a donation from Mr William F De Bois Maclaren “the yearly interest of which is to be used in helping poor and deserving students, or in any other scheme, approved of by the Governors” according to the Annual Report 1916-17. She was also listed in the 1918-19 Calendar under prize winners for 1917-18 for her design for the Roll of Honour, which was created in 1925.

The recent gift of a few drawings and photographs of Doddrell’s early work (passed to the School by her descendants) highlight that in the immediate year’s post-1918, there were plenty of other commissions being undertaken to commemorate the War. As a more than competent calligrapher it seems that Doddrell’s works was in demand and amongst the recently deposited material are photographs of two seemingly completed Rolls of Honour in Glasgow – one for Stevenson Memorial Church and the other, Busby West United Free Church. 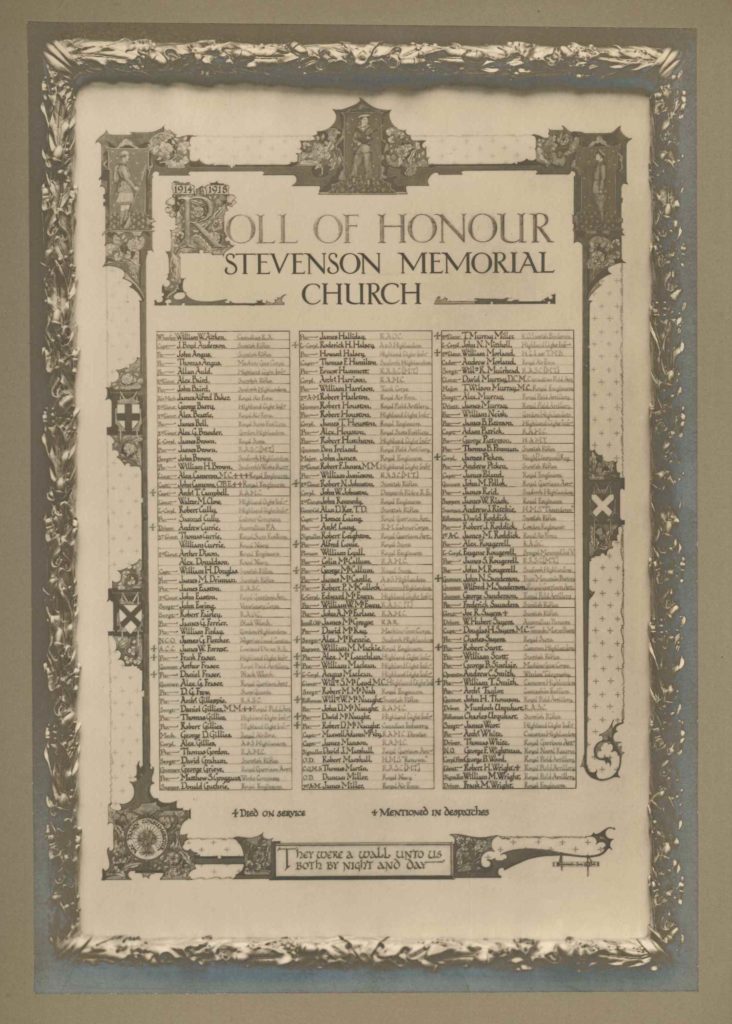 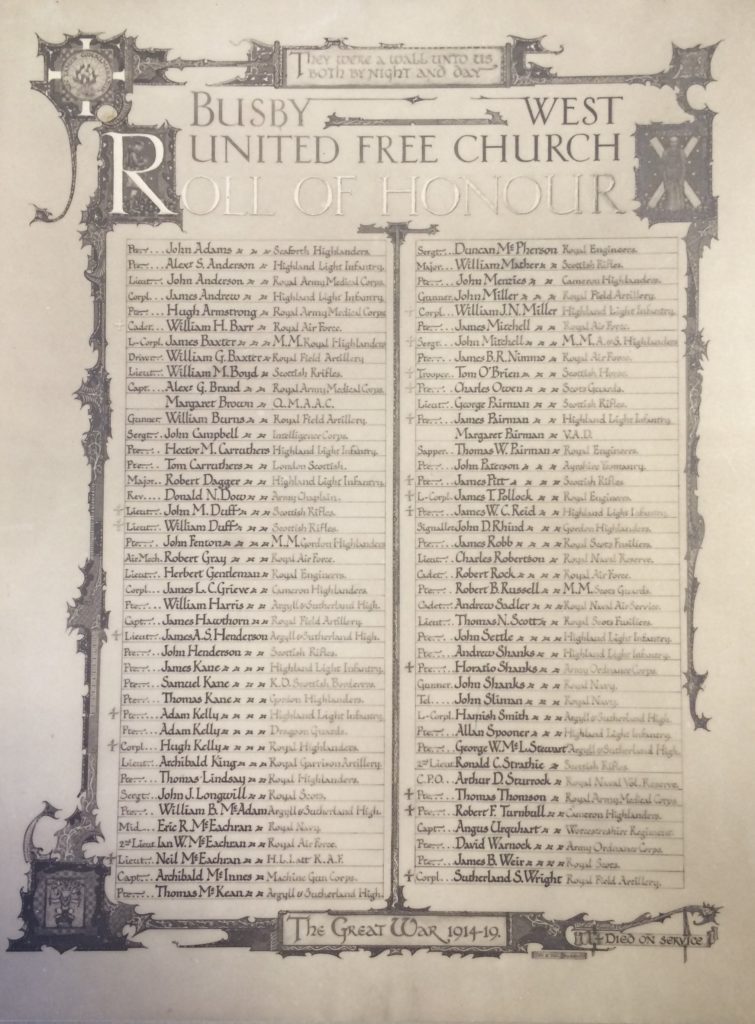 Research into these two additional works is on-going (do they survive?) but interestingly the design for the Stevenson Memorial Church appears to be a much simpler and more traditional work; an elaborate and decorative calligraphy panel set into what looks to be a moulded frame adorned with oak leaves and acorns.

What became clear with the conservation of the GSA Roll of Honour was that the materials used here (a copper triptych frame supported by an extremely heavy timber sub-frame) was an expensive and perhaps unnecessary luxury, and the weight of the panels themselves placed undue stress on the hinges so that the opening and closing of the two side panels was difficult at best. Although there is little mention of the Roll of Honour in the School’s Annual Reports (and no apparent record of the work being formally unveiled) the GSA’s Finance Committee meeting on 9 February 1925 approved a total sum of £108.10.6 for the project. Doddrell herself was awarded £65 for the design and execution of the work, glass accounted for a further £5.10.6 whilst the supply of copper accounted for the rest, £38 (over £1600 at today’s prices).