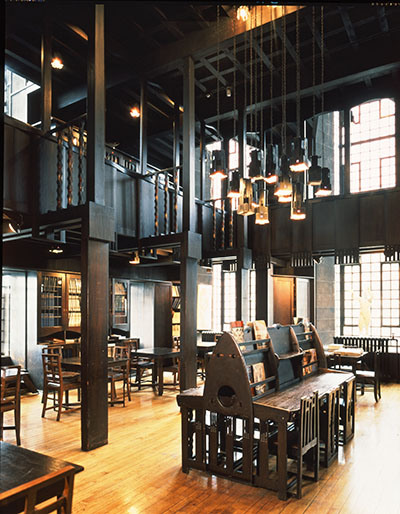 Since the recent fire in the Mackintosh Building and the sad destruction of the Library there has been much discussion on how this space is going to be recreated. There has recently been a debate at Glasgow Queen’s Cross Church around whether this space should be ‘reinvented or restored’ and the symposium in Venice this Saturday will kick off the discussion on a international scale. However, locally what should or should not been done with the Mackintosh Library space is also being contemplated, with our own Interior Design course students undertaking the task of preparing a proposal for what they would do with the Library space if they had the option.

As part of the background to this project the Mackintosh Curator and Archive Assistant from the GSA Archives and Collections Centre gave a talk to the students explaining the role of the archives in the recovery process of the Mackintosh Building, and some of the issues that will face the Mackintosh Library restoration. These issues include questions around adaptations that were made to the Library during its lifetime to make it more functional, including the addition of a staircase and the use of Mackintosh Tearoom chairs for the last 50 years, rather than those originally designed for the Library. If the Library is to be restored should it be taken back to the way it was when it originally opened? Or to how it was just before the fire? Into this mix there has to be some consider of the role of people’s memory in the space’s reconstruction. Many past and current students have personal recollections of the Library and what it meant to them, should these memories be disregarded if the space is going to be re-invented? Or should they be the top priority, even above the concerns of current students, some of who will never have seen the library in its original form? The talk regarding these issues, and some of the questions raised by students can be listened to here.

The manner in which the library has adapted to the needs of students and staff in order to remain functional makes the idea of an ‘authentic’ recreation malleable. This idea of what is ‘authentic’ or not, and why it matters, was discussed in a talk by the school’s Mr Nicholas Oddy. An interesting lecture that can be heard here.

After presenting an initial proposal, the interior design students showed their final designs alongside their notes last Friday with some very interesting results.

While it is unlikely that we will know exactly what is happening with the Mackintosh Library for some time, it will hopefully continue to inspire conversations between students and staff around what could be done with this opportunity.