Home / Blog / Cataloguing GSA: The Board of Governors and the earliest catalogue of books and casts

Cataloguing GSA: The Board of Governors and the earliest catalogue of books and casts

We got a little surprise recently at the Archives and Collections when our cataloguing archivist Rachael Jones discovered a document which pre-dates the foundation of the School! Rachael shares her findings below…

The Glasgow School of Art was founded in 1845 and originally governed by a Committee of Management, comprising of a president, two vice presidents, a treasurer, a secretary and ten other members, all of whom were elected by the School’s subscribers at annual general meetings. The Committee was responsible for the whole management and direction of the affairs of the institution, and the appointment of all officers and servants with the exception of those appointed by the Government Council at Somerset House. 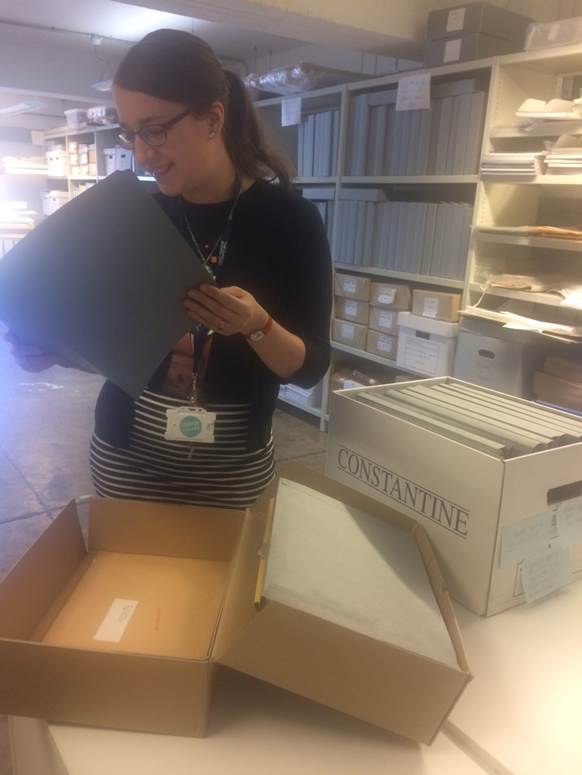 In 1892 the Committee of Management was replaced by a Board of Governors, following the School’s incorporation under the Companies Acts in that year, and the President was replaced by a Chairman. Representatives were now elected from the principal public bodies of the City of Glasgow. The Board of Governors are still responsible for the overall direction of the School and many of the important decisions made, and so I knew there were many important records to be found within the records of this body, known under the archive reference ‘GOV’.

I also discovered some interesting inventories of Glasgow School of Art property. Until now, the earliest known catalogue for Glasgow School of Art books and casts dated to 1847 but I came across an earlier inventory that actually pre-dates the foundation of the School in 1845. This catalogue of casts and books, prints, plans and statues, dates to 1844, part of which appears to be a record of a sculpture collection which was sent to the Glasgow School of Art by the Government School of Design in South Kensington so that GSA could choose sculptures to make casts from for the teaching of students who would enter the school the next year. There is also a letter explaining this from Somerset House, which shows the provenance of the collection coming from the French Industrial Exposition of 1844, held in a temporary structure on the Champs-Élysées in Paris. You can find the catalogue entry for this early inventory under reference number GOV/7/12.

Find out more about the history of the Glasgow School of Art here.

You can access the catalogue for these records, and the rest of what I found in the Board of Governor’s papers, here. If you’d like to consult any of the material older than 30 years, you can find out how to make an appointment to visit us here.

See you again on this blog where I will be sharing more finds throughout this cataloguing project!

All Blog Posts ›
GSA and the First World War: Fundraising on the Home Front - Part 1
How to re-home 400 textiles…
Recovering our Textile Archives
Forever changing : Original Mackintosh architectural detail exposed
Sew Last Century! at the The West End Festival
New display in GSA Library: Talwin Morris, Bookbinder
High praise for our online catalogue - all the way from Illinois!
The First International Exhibition of Decorative Art
Episode 05 - Some are big like pebbles and some are small like sand
The Needlework Development Scheme
Sisters on the Home Front Part 3: Kay Bryant
Arts and Crafts at the National Archives
The Archive Strikes Again! A new acquisition for our growing collections
New acquisition: Robert Brydall sketchbook
Margaret Macdonald Mackintosh embroidered panels return from Japan
International Women's Day 2018: Inspirational Women Artists and Designers at GSA
Spook-tacular Archives...
New Recruits!
Getting in Touch: Fred Pollock
It's good to talk