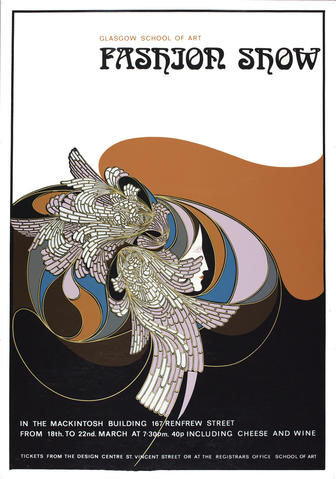 Poster for a fashion show at The Glasgow School Of Art

This poster advertised The Glasgow School Of Art's 1974 fashion show which was held in the Mackintosh Building between the 18th and the 22nd of March.

Robert Stewart was one of the foremost British designers of the second half of the twentieth century. His work revolutionized design in postwar Britain. Trained at the Glasgow School of Art in the 1940s. He took charge of the printed textiles department there in 1949. He was passionately interested in surface design and became one of the most significant influences in the field. He designed for Liberty, Donald Brothers, and the Edinburgh Tapestry Company in Great Britain and North America before forming his own company to produce printed ceramic kitchenware. During the 1970s and 1980s he designed and manufactured large-scale ceramic murals for public buildings. During his thirty-five years at the Glasgow School of Art, Stewart proved to be an inspiring and influential teacher. His legacy is to be found in his many successful former students now working in a variety of fields, including textiles and theatre design.

A duplicate of this poster can be found under reference number GSAA/EPH/10/127.

Other material relating to the fashion shows can be found at DC 093.