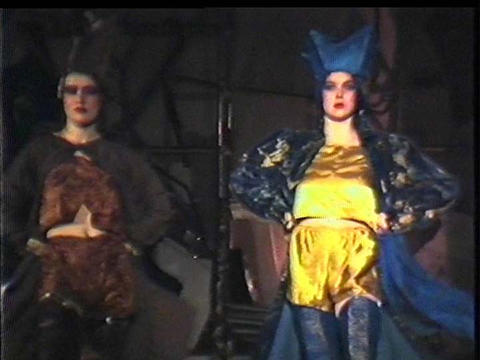 The 1986 Fashion Show was held in the Assembly Hall from 10th to 15th March 1986. The film comprises footage of students modelling on the stage. There is a mixture of men’s and women’s garments.  Styles and themes of garments include Egyptian, metallic, wedding, Queen of Hearts, cloaks, formalwear, masks, hats, bright colours, geometry, flamboyant, utility wear. There is also a dress made from Benson and Hedges cigarette packets – the model wearing this dress is smoking on stage. There were also a number of Harris Tweed garments in the show as Harris Tweed ran a design competition that year. Students involved in the show came from a variety of subject areas and years, including: Embroidery and Weaving; Silversmithing and Jewellery; and Printed Textiles. All the textiles students modelling designed garments for the show. It is believed that this show had a mix of professional models and students. The models were less experienced models from agencies. The set for the show consisted of a garage workshop setting with car and motor parts at the rear and sides of the stage. It was designed by the Royal Scottish Academy of Music and Drama. The hair for this show was by Taylor Ferguson. The soundtrack for this film was added during the editing phase of the film and contains music which was played at the fashion show. Soundtrack: Metal/drums, Think – Aretha Franklin, What's New Pussycat – Tom Jones, I Heard It Through the Grapevine – Marvin Gaye, Dance of the Knights – Prokofiev, O Fortuna, Carmina Burana – Orff A short clip of this film is available online at https://vimeo.com/channels/504825/videos. To view the full length film, please contact GSA Archives and Collections. Note – the full length film contains flashing images at 5:36 to 5:44. The information above has in part been provided by staff and alumni of GSA. With special thanks to Helena Britt for provision of information.