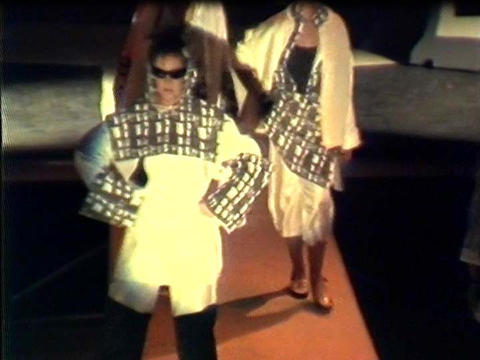 The 1984 Fashion Show was held in the Assembly Building from 30th April to 5th May 1984. The film comprises images of the fashion show poster, followed by footage of the audience arriving at the venue and students modelling on the stage. There is a mixture of men’s and women’s garments.  Styles and themes of garments include music, pastels, metallic, rainbow, wedding, hats, white, bright colours, jewellery, off-the-shoulder, flamenco. Students involved in the show came from a variety of subject areas and years, including: Embroidery and Weaving; and Printed Textiles. All the textiles students modelling designed garments for the show. The set for the show consisted of large musical notes and staves, plus piano keyboards. It was designed and built by Minty Donald and Jean Cameron. The soundtrack for this film was added during the editing phase of the film and contains music which was played at the fashion show. Soundtrack: In the Mood – Glenn Miller, Relax – Frankie Goes to Hollywood, Pull up to the Bumper – Grace Jones, It's Raining Men – The Weathergirls, Holiday – Madonna, Right Now – The Creatures, I Heard It Through the Grapevine – Marvin Gaye, There is Nothing like a Dame – South Pacific Male Chorus, Kick in the Eye – Bauhaus, We Live So Fast – Heaven 17, Vicious – Lou Reed, I am What I am – Gloria Gaynor, Living on the Ceiling – Blancmange, Get Up (I Feel Like Being a) Sex Machine – James Brown, Heaven Sent (extended Version) – Paul Haig, Je ne regrette rien – Edith Piaf, I Travel – Simple Minds, Bourgie Bourgie – Gladys Knight and the Pips, Propaganda – Dr. Mabuse, Loving You made a Fool out of Me – Kid Creole and the Coconuts, Small Town Creed – The Kane Gang, You Take Me Up – Thompson Twins, Free Nelson Mandela – The Specials, Fever – The Cramps, I Zimbra (12’ Version) – Talking Heads, Dancing in the Street – David Bowie & Mick Jagger, Cuentame Que Te Paso – The Manhattan Transfer The last five minutes of the film is purely instrumental music with no images. Special thanks are given to Marise and Ken Plater. A short clip of this film is available online at https://vimeo.com/channels/504825/videos. To view the full length film, please contact GSA Archives and Collections. The information above has in part been provided by staff and alumni of GSA. With special thanks to Helena Britt for provision of information.