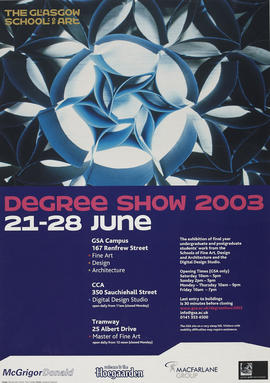 Poster for The Glasgow School Of Art degree show

This poster advertised The Glasgow School Of Art's annual degree show. The exhibition was held on The Glasgow School Of Art campus as well as in the Centre for Contemporary Arts and Tramway which are local arts centres. The 2003 degree show was sponsored by McGrigor Donald, Hoegaarden Beer, the MacFarlane Group and the Gordon Yuill Company. The image used in the poster is by Raul Ortega and the poster was designed by Inlapland.

Folder containing 34 black and white and colour photographs of Joan Eardley and her work taken by George Oliver. Also contains exhibition catalogues and cuttings from such, press releases and postcards.

Notes of James McIntosh Patrick, artist and student at The Glasgow School of Art, Scotland

These notes are Patrick's own writings but have been copied out by his daughter due to the original notes being illegible. The notes describe his time at Glasgow School of Art and include descriptions on societies (i.e. The Dramatic Society) as well as the etching workshop and studio spaces.

Papers belonging to William Drummond Bone, student and member of staff at The Glasgow School of Art, Scotland

Papers of the Ballantine family, students at The Glasgow School of Art, Scotland

The collection is comprised of Lewis Ballantine's own works of art such as life drawings, self portraits, design work and sketchbooks, and photographs, as well as sketchbooks and notebooks that belonged to his mother and father.

The work in the collection by Lewis Ballantine forms a valuable record of his time at the Glasgow School of Art. They show the development of his work as an artist, and provide an example of the type of work that Drawing and Painting students were required to produce during this period.

Lewis Ballantine's mother, Alice Longmuir Nisbet was herself at Glasgow School of Art in the 1930s, and was involved in the Socialist Art Circle. The sketchbooks in this collection also contain works by other members of the group such as Stuart Henderson, Jimmy Morton, James ("Jimmy") Ogilvie, W. C. Thompson and John McLean. The photographs in the collection picture Alice Longmuir Ballantine and John ("Jack") Hendry Ballantine, and Lewis Ballantine's maternal grandfather, Robert Dow Nisbet. 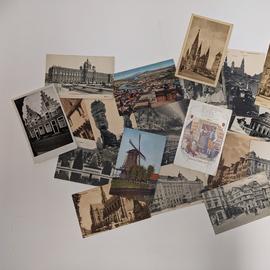 The collection also includes original illustrations drawn by A S Boyd (aka TWYM) and Stephen Reid, both noted Scottish illustrators. 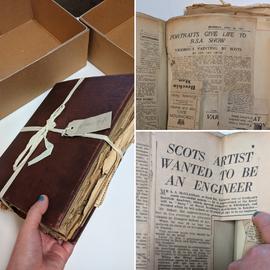 Presscuttings book of reviews of exhibitions including those at the GSA Club, RSA and Glasgow Institute of Fine Art, 1913-1959. 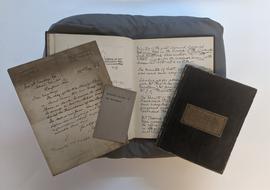 Records of the Scottish Society of Art Workers