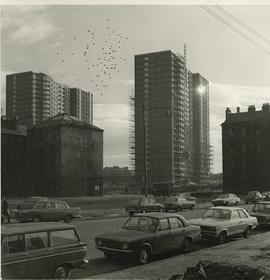 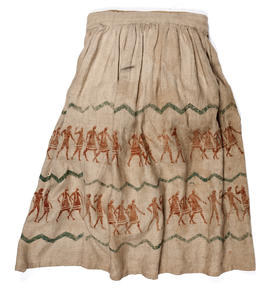 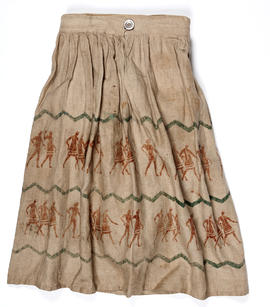 The George and Cordelia Oliver Archive

The George and Cordelia Oliver Archive consists of:

The material has been arranged into three subfonds: Newscuttings, Photographs and Personal Papers.

Oliver [née Patrick], Cordelia McIntyre (1924–2009), artist and art and theatre critic, was born at 101 Pollok Street, Glasgow, on 24 April 1924, the daughter of Robert Patrick, marine engineer, and his wife, Flora McCallum, née Matchett. She was educated at Hutcheson's Grammar School where she won both the art and the English prizes. To her English teacher's displeasure she opted for art and went to study at Glasgow School of Art in 1940. There her contemporaries included Joan Eardley and Margot Sandeman. The principal of the art school was the portrait painter W. O. Hutchison and when she was awarded the Guthrie portrait prize, Cordelia Patrick formed her own ambition to be a portrait painter. After taking her diploma in 1944, she taught at Craigholm School for Girls and also took evening classes in life drawing at Glasgow School of Art. A gifted singer, she was a member of the Glasgow Orpheus Choir and sang with the choir at the first Edinburgh International Festival in 1947. On 3 September the following year she married the photographer, artist, and writer George Arthur Oliver (1920–1990), son of Robert Hawthorn Oliver, motor engineer.

Following their marriage George and Cordelia Oliver moved to London, but in 1950 returned to Scotland to live in Edinburgh where she worked as a painter and designer. During these years she exhibited regularly at the Society of Scottish Artists, the Royal Scottish Academy, and the Royal Glasgow Institute of the Fine Arts. Drawings that she did backstage of performers at the Edinburgh Festival were published in the Glasgow Herald and in 1951 she became a freelance designer and art critic for that paper, but with the anonymous byline ‘Our art critic’. She continued to work as an artist after returning to live in Glasgow in 1959. Indeed, to the end of her life she always considered herself as an artist first of all, but during the 1960s her writing began to take precedence and on the invitation of Brian Redhead, features editor of the Manchester Guardian, she began to write for that paper under her own name as Scottish correspondent on both art and the theatre. She wrote for the Guardian for more than twenty years and subsequently for various journals including Plays and Players and Plays International. Latterly she contributed regularly to Artwork. Her last contribution shortly before her death was an article recalling her experience of nights spent fire-watching in Glasgow School of Art during the war.

Oliver's writing was direct and always very personal. It was the force with which she expressed her views that made them count. She was not at all a theoretical critic with any kind of programme, unless it was to support what she saw as avant-garde. As champion of the modern, she formed an alliance with Richard Demarco and Jim Haynes, whose Paperback Bookshop brought a lively and iconoclastic element to Edinburgh. The Traverse Theatre, opened in 1963, was an enduring product of that milieu. Haynes became director in 1964 and Demarco opened an art gallery within the theatre's cramped premises. He later opened his own gallery (in 1966) from which, as well as exhibitions, he organized a variety of less orthodox projects including a series of celebrated artistic journeys. In 1970 Demarco put on ‘Strategy: Get Arts’, the exhibition that brought Joseph Beuys to Edinburgh. Oliver wrote favourably about it. In 1971 she and George Oliver travelled to Bucharest to join Demarco in preparation for a Romanian exhibition that brought Paul Neagu to Scotland and for which she wrote the catalogue. She also supported Tadeusz Kantor whose Cricot Theatre she went to see in Paris in 1973 in advance of its Edinburgh début with Demarco. Demarco later said that the Olivers' ‘patronage … proved to be crucially important as it was often the case that their support helped give credibility to the experimental nature of such an enterprise’ (Artwork, 159, winter 2009–10).

Oliver also gave valuable support to the Citizens' Theatre in Glasgow and to Scottish Opera and wrote about them respectively in It is a Curious Story: the Tale of Scottish Opera, 1962–1987 (1987) and Magic in the Gorbals: a Personal Record of the Citizens' Theatre (1999). She was not always so generous. She did not think much of Ian Hamilton Finlay (she always referred to him as Ian Finlay) when he was her fellow student at Glasgow School of Art, nor did she ever moderate her opinion. She was, however, a great supporter of others who were her fellow students, especially Joan Eardley about whom she wrote a book (1988) and whose work she curated in 1975 (at the Third Eye Centre, Glasgow, of which she was a founding board member) and 1989 (at the Talbot Rice Gallery, Edinburgh). She curated a number of other exhibitions, including a major survey of contemporary Scottish painting, ‘Painters in Parallel’ (1978, Edinburgh College of Art) and also wrote catalogues for exhibitions of individual artists including Jessie M. King, George Wylie, Jack Knox, Philip Reeves, Frances Thwaites, Bet Low, Winifred Nicolson, and Pat Douthwaite (with Douglas Hall). She wrote a book about James Cowie (1980) in the Modern Scottish Painters series published by Edinburgh University Press. In 1998 she commemorated her husband in The Seeing Eye: the Life and Work of George Oliver. She died at the Victoria Infirmary, Glasgow, of hypothermia and heart disease on 1 December 2009. A memorial meeting was held at the Glasgow School of Art on 21 May 2010.

An art school training, with drawing as the favourite means, plus a life-long enthusiasm for people and places, combined to make George Oliver a wide-ranging observer, not least because the pen, in time, gave way to the camera as a recording medium. Born in Birmingham but brought up in Glasgow, George was educated at Bellahouston Academy, then enrolled at Glasgow School of Art in 1938, was called up for war service in the RAF where he ended in New Delhi, mainly engaged in visual aids. Back to GSA for a Diploma in Commercial Art, he then worked for 18 months in London before becoming art editor of 'Scotland's SMT Magazine' (once Edinburgh's answer to 'The Scottish Field') and then, for much of his life as a freelance. But in between, during the later 1950s he was employed as Press and Publicity Officer for the Council of Industrial Design in Glasgow. George also suggested, organised and wrote catalogues for, the very first of the SAC touring photographic exhibitions, the subjects being James Craig Annan and Robert M. Adam. The posthumous exhibition of his own work, 'The Seeing Eye', held in the Mitchell Library in 1998-99 gave some idea of the range of his output. His idol was Cartier Bresson.
During the 1960s George became known to a much wider audience for a series of distinctive coffee table books generically titled 'Early Motor Cars'. Covering the veteran and vintage years, English sports cars and early racing cars, these were books of full-page profile scale drawings of specific vehicles, many of which were destined to be cut out and framed. Indeed, when he was commissioned to prepare the illustrations for a history of Citroen (published by Robert Delpire) the pages in questions were deliberately fixed in a way that made their removal an easy matter. His work as a serious historian of the motor car found an outlet in several commissions. 'A History of Coachbuilding' was published in 1962 and the much more lavish 'Cars and Coachbuilding' some ten years later. There were also serious books on Rolls Royce and Rover cars, and the long-researched history of the Scottish motor industry, 'Motor Trials and Tribulations' which was published posthumously by HMSO. In 1989 his book, 'Photographs and Local History' had been published by Batsford.