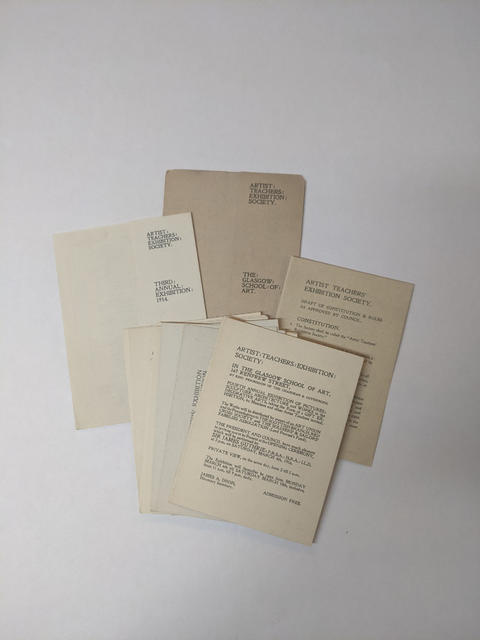 The arrangement of the material reflects the order in which it was deposited.

James A Dron (born 3 December 1862) was a student at Glasgow School of Art for three separate periods: from 1887 to 1891; from 1895 to 1901 and from 1914 to 1917. An Andrew Dron, presumed to be his brother, also attended from 1982-83 to 1883-84 and also 1890-91. James A Dron was first admitted in January 1887 when he was 24 years old. His address was St George’s Road in Glasgow and his occupation was given as Clerk. He returned in 1887-88, and also in 1888-89 when his address changed to 27 Carnarvon Street and his occupation changed to Draughtsman. In 1889-90 he won a Bronze medal for a still life painting in oil colours and the National Queen’s Prize for Chalk Drawings of Figures from Antique. In the Annual Report (published February 1891) in the reports of the Examiners for the Painting from Still Life, the examiners G.D. Leslie R.A. and W.F Yeames, R.A. wrote: “TONE STUDIES.- The study of James A. Dron, of Glasgow, for which a bronze medal is given, is all together well painted, but the portrait on the right-hand side is too obtrusive. The Examiners regard it as a very faithful piece of tone study, the spectroscopic effect being obtained more by truth of tones than perspective of lines.” Also in 1889-90 he received a free studentship ­ - these were awarded for excellence in work and in examinations. He won seven shillings and sixpence for second prize in Antique Life and Still Life work, and 15 shillings first prize for Best Still Life in Oil. In 1890-91 he again received a free studentship and won first prize (ten shillings) for Best Set of Antique Detail. He returned in 1891-92 - when he is still described as a draughtsman - for what was his last year at The Glasgow School of Art at this point. He was one of the signatories to a request that the Corporation of Glasgow purchase Whistler’s ‘Arrangement in Grey and Black, No. 2: Portrait of Thomas Carlyle’. You can see more details about this on the Correspondence of James McNeil Whistler website https://www.whistler.arts.gla.ac.uk/correspondence/people/biog/?bid=Dron_JA&initial=. He exhibited at the Royal Glasgow Institute of Fine Arts from 1890 to 1923 and became a member of Paisley Institute in 1892. In 1895-96 James A Dron came back to work towards the Art Class Teacher’s Certificate and Art Master’s Certificate. At this point he was described as a teacher, and was living in Firhill Road in Glasgow. In 1896-97 he continued to enter work for the Art Class Teacher’s Certificate and Art Master’s Certificate and also won first prize (7 shillings) in Design, Plant Outline. The Annual Report published in January 1898 reports that he found a position as an Art Master in 1896-97. “The practical nature of the school training may be gathered from a note of the following appointments made during last session, through the agency of the school: - James A Dron, Drawing and Painting Master, Mount Florida School, Cathcart School Board.” He enrolled for the year 1897-98, 1898-99 and 1899-1900. He now lived in Randolph Place, Mount Florida, and his occupation was art teacher. We do not know exactly which classes he enrolled for but he is recorded as being examined for subjects such as Painting from Still Life, Drawing the Antique from Memory, Modelling from Life, and Modelling from the Antique. He was awarded an Art Master's Certificate Group 1 and 1st class Certificates for Life, Antique, Anatomy and Painting. In the Annual Report published in April 1900 is was reported that in the previous year (1898-99) published in February 1901, “The Following appointments were made during the last session at the agency of the school – Mr James A Dron to be Art Master in the Bonnybridge Art Class.” In 1899-1900 he was appointed as Art Master at the Mount Florida Art Class. He additionally took on the role of Second Master of Gorbals Evening Art Classes and taught private and sketching classes for ladies. The Glasgow School of Art Collections and Archives has a collection of testimonials written in support of James Dron for employment in different positions: https://gsaarchives.net/collections/index.php/dc-081. He acted as Secretary and Treasurer for the Artist Teacher's Exhibition Society. The Artist Teachers' Exhibition Society was established c1910-1911 in Glasgow, and was open to all who were artist teachers, with its objective being to maintain a high standard of personal work on the part of its members. You can see records from the Society in The Glasgow School of Art Archives and Collections online catalogue: https://gsaarchives.net/collections/index.php/artist-teachers-exhibition-society. In 1914 James A Dron began his third period of time at The Glasgow School of Art when he came for evening classes in etching. He was an Art Master but by this time was living at Armorica, in Giffnock in Glasgow. Armorel Dron, born 21 April 1903, from the same address and presumed to be his daughter, attended the Glasgow School of Art for Drawing and Painting day classes from 1921-22 to 1925-26. In 1929 James A Dron exhibited at the Royal Scottish Academy showing a painting called ‘The North Transept. The Gloucester Cathedral’. If you have any more information, please get in touch.

He exhibited at Scottish exhibitions from 1892 onwards and became a member of Paisley Institute in 1892. He was employed as an Art Teacher of Bonnybridge Art Classes; as Visiting Teacher of Drawing and Painting at Mount Florida Public School; as Second Master of Gorbals Evening Art Classes and also taught private and sketching classes for ladies.

The Artist Teachers' Exhibition Society was established c1910-1911 in Glasgow, Scotland, and was open to all who were artist teachers, with its object being to maintain a high standard of personal work on the part of its members. James A Dron acted as Secretary and Treasurer for the Society.
The first exhibition was held in 1911 and the fourth in 1916, an exhibition which gave its proceeds to the Scottish branch of the Red Cross Society and the Soldiers' & Sailors' Families Association. Members included many staff from The Glasgow School of Art, including Fra Newbery, Ann Macbeth and Maurice Greiffenhagen as well as teachers from other institutions in Scotland.

Material is also held within GSA Ephemera books which contain material from the organisation and Newbery's correspondence. The books also contain correspondence between Newbery and James Dron, the treasurer of the Society.