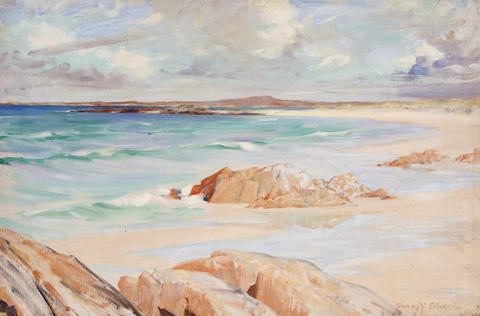 This item was lost in the fire in The Mackintosh Building at The Glasgow School of Art on 23rd May 2014. Seascape with rocks in foreground, land in mid-ground.

Henry Young Alison, brother of artist David Alison, was born on 21 September 1889 in Dysart, Fife, Scotland. He was a figure and portrait painter and exhibited at the Royal Scottish Academy from 1916-1921. He trained at the Glasgow School of Art, Glasgow, Scotland, under Fra. Newbery from 1905-1912, studying drawing and painting and life classes under Maurice Greiffenhagen, Paul Artot and James Huck, and gained his Diploma in 1911.
During the First World War he served in France, but was captured and held as a Prisoner of War. Whilst imprisoned he was wounded in one eye and lost the sight of it (his wartime letters to the Glasgow School of Art survive in the Secretary and Treasurers's letters, 1914-1918). He joined the staff of the Glasgow School of Art in 1927 as an assistant in the Drawing and Painting Classes, becoming Supervisor of the Evening School and the General Course in 1932. At Alan Walton's resignation in 1945 he took over as Interim Director.
One important legacy he left to the school is the small staircase in the Library leading to the balcony floor. This was built by Alison and a janitor during the Easter vacation in 1946.
He resigned in April 1946 when D P Bliss was appointed as Director.
Henry Young Alison is listed on The School's World War One Roll of Honour. Please contact us if you have any information.