Item NMC/0295D - Two figures from the tomb of Canova, Venice 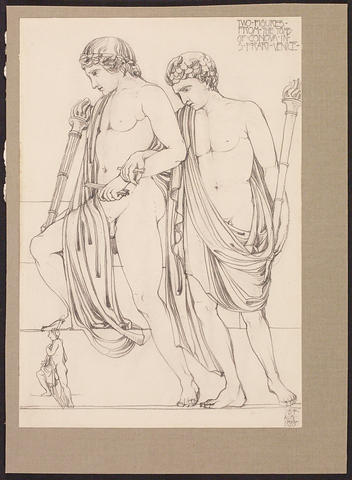 Two figures from the tomb of Canova, Venice

Study of figures from the tomb of Canova in Santa Maria dei Gloriosa, Venice.

James Black Fulton (1875-1922) was born in Fenwick, Kilmarnock, Scotland, in 1875. He studied at Glasgow School of Art, Glasgow, Scotland, from 1892-1898, where he was successful in competitions and as a brilliant draughtsman was awarded both the Tite Prize and the Soane Medallion. He was noted for his watercolours of Venice, Italy, and Istanbul, Turkey, and is represented in Glasgow Art Galleries and Museums. Fulton worked as an architect in London and taught at LCC and in Brixton, London before returning to Glasgow School of Architecture, part of the Glasgow School of Art, as its Director in 1920. He died prematurely on 11 April 1922.