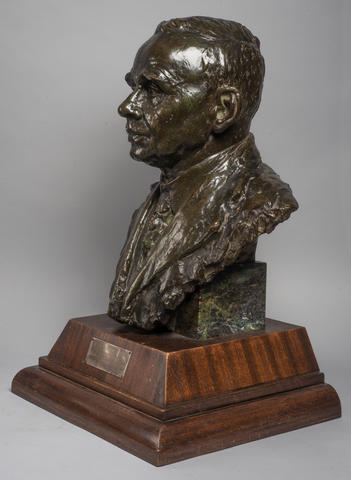 Archibald Cozen Dawson was a sculptor who specialized in architectural carving and statuary. He was born on the 16th of April, 1892 to Ann Cozen Davidson and Mathew Dawson, an architectural sculptor in Hamilton, Lanark. Archibald attended The Glasgow School of Art from 1908 to 1916, and 1918-1920, alternating between part and full-time courses in sculpture. He was later a member of staff at the School, from 1920-1937 during which time he taught: Stone carving and pointing (Modelling & Sculpture) 1920/21-, Stone carving (Design & Decorative Art) 1920-21 – 1924/25, Ceramics 1925/26 -. He became Head of Section (School of Modelling & Sculpture) in 1928/29, then was lecturer in modelling (Glasgow School of Architecture) 1928/29 -. Figure pottery (School of Design & Crafts) 1930/31. Becoming Head of the School of Modelling, Sculpture & Ceramics, while teaching Life, Antique & Figure Pottery between 1932/33 – 37. During the First World War, Dawson served with the Glasgow Battalion of the Highland Light Infantry, being commissioned for memorials and plaques after his demobilization. He died in 1938. He is commemorated on The Glasgow School of Art’s First World War Roll of Honour.