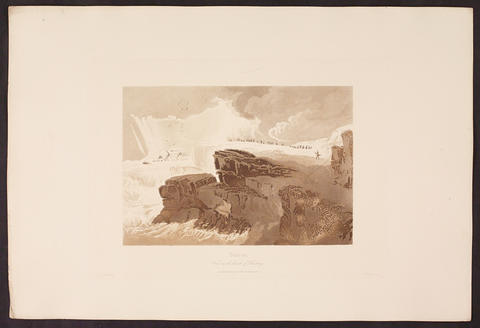 View on the coast of Hastings. From "A Treatise on Landscape Painting and Effect in Watercolours: from the first rudiments to the finished picture: with examples in Outline, Effect, and Colouring", first published in London by S & J Fuller in 1814, republished in 1840.

Born Birmingham, 29 Apr 1783; died Harborne, 7 Jun 1859. English landscape painter, mainly in watercolour. In his youth he worked as a scene painter in Birmingham, then in 1804 moved to London, where he took up watercolour, receiving lessons from John Varley. He lived in Hereford, 1814–27, and in London, 1827–41, before retiring to Harborne, near Birmingham (it is now a suburb of the city), from where he made annual sketching tours to the Welsh mountains. In spite of a certain anecdotal homeliness, his style was broad and vigorous, and in 1836 he began to paint on a rough Scottish wrapping paper that was particularly suited to it. A similar paper was made commercially and marketed as ‘Cox Paper’. Cox devoted much time to teaching and wrote several instruction books on watercolour.

English aquatint-engraver. He was apprenticed to the line engraver John Paas ( fl c1770-1805) on 15 March 1795 and enrolled in the Royal Academy Schools on 3 February 1801. He was soon established as one of the leading aquatint-engravers, at first publishing most of his prints himself. His main early work was ten sets, each of four prints, of sporting subjects after Dean Wolstenholme (1757-1837) which he published between 1806 and 1814. After about 1815 he worked for other publishers, both on singly issued sporting prints and on illustrated books, notably for David Cox's Treatise of Landscape Painting (London, 1813-14) and William Henry Pyne's The History of the Royal Residences (London, 1816-19). He appears to have stopped engraving about 1820. His son Richard Gilson Reeve (1803-89) began to sign plates from about 1826, at first as "Reeve Junr" but thereafter as "R. G. Reeve", and most authorities have failed to distinguish between their work. The younger man worked on illustrated books such as William Westall's and S. Owen's (1769-1857) A Picturesque Tour of the River Thames (London, 1828). Richard Gilson Reeve's brother, Augustus William Reeve (c1807-1880), also worked in aquatint.