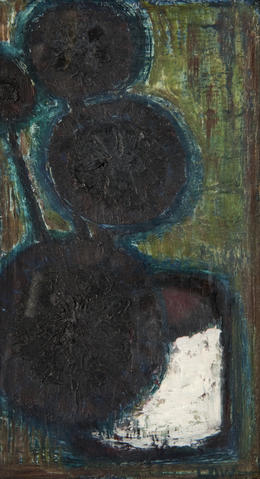 This item was lost in the fire in The Mackintosh Building at The Glasgow School of Art on 23rd May 2014. Abstract design.

Bet Low ARSA, RSW, DLitt, was born in Gourock and studied art at Glasgow School of Art along with Ian Hamilton Finlay during the Second World War. She attended Jordanhill Teacher Training College and later worked as an art therapist. She co-founded, along with John Taylor, the influential New Charing Cross Gallery in Glasgow. Many of her watercolours have a beguiling, almost mystical quality, which reflects her training in teaching and art therapy.

At Greenock Academy Low displayed a talent for landscape work and in 1942 went to the Glasgow College of Art (Diploma in Drawing and painting in 1945) and attended Hospitalfied College of Art, Arbroath.

During her training at Jordanhilll she became a friend of the young comedian Stanley Baxter. He got Low involved in the Unity Theatre, an outreach project in central Glasgow. The mix of singers, artists and actors appealed to her and Low worked on many of the projects to encourage the young. She also met, and married, Tom McDonald, Unity's resident designer.

Along with members of the Clyde group of writers and artists, Low drew many of the still damaged areas around the Clyde. These etchings captured an era of forgotten war-torn Glasgow and are now of historic importance. Low started exhibiting and her works were seen at the Scottish Independent Artists and the Royal Glasgow Institute. Her watercolours were also seen at the New Art Club, founded by the redoubtable JD Ferguson. Indeed Ferguson supported Low over many years and invited her to show her oils and watercolours in 1956, when he organised the first open-air exhibitions on the railings at the Glasgow Botanic Gardens.

In 1963 Low opened the New Charing Cross Gallery in Glasgow with John Taylor and Cyril Gerber. The trio mounted a fresh exhibition every month and the adventurous nature of the pictures attracted much attention. They received critical acclaim from the national press and the gallery's policy of encouraging Scottish contemporary art throughout Glasgow – and Scotland – was recognised. After two adjoining galleries were opened, the New Charing Cross closed in 1968 and Gerber opened the Compass Gallery.

For many years Low owned a home on Hoy, Orkney and her love of the island, its rugged and exciting seascape, and its people remained dear to her all her life.

Low was awarded a D.Litt from Glasgow University in 1999.

oil on board, framed