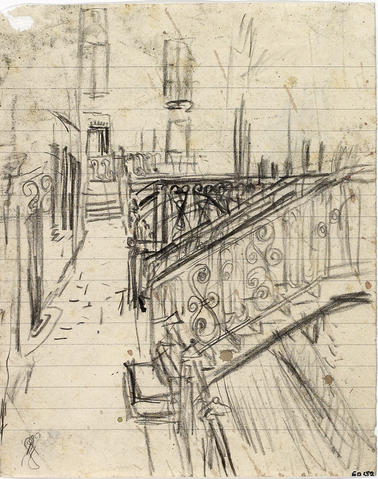 Drawing of Venetian bridge. One of Eardley's paintings undertaken as part of her art school travelling scholarship.

b. 18 May 1921, Warnham, Sussex, d. 16 August 1963, Killearn Hospital, nr Glasgow. Joan Kathleen Harding Eardley was educated at Blackheath School until 1938. She attended Goldsmith’s School of art for a few months before moving with her family to Glasgow and enrolling at Glasgow School of Art in 1940. She attended GSA until 1943, studying under (among others) Hugh Adam Crawford. The year she left she was awarded the Guthrie Prize for portraiture. After leaving GSA she enrolled in Jordanhill College of Education, but left after the first term in order to become a carpenter’s mate. After two years Eardley returned to the formal study of art, attending Hospitalfield, Arbroath in 1947 and studying under James Cowie. She returned to GSA the following year to take up her postponed post-diploma scholarship. In 1948-9 the awarding of a travelling scholarship enabled her to travel to Paris and Italy. In 1955 Eardley was elected an Associate of the Royal Scottish Academy, and was made into a full member in 1963. She was at the time the youngest female artist to achieve this. Eardley’s first one-man show was at GSA in 1949. She continued to exhibit regularly, especially at Glasgow Institute and Aberdeen Art Gallery. Today she is represented in over 20 art galleries in Scotland and across the world. In 1950 she ‘discovered’ and began to paint at Catterline, on the coast between Inverbervie and Stonehaven. She moved there in 1956, using a deserted cottage as a studio and base whilst she worked outside. The landscapes that were completed at Catterline provide an interesting contrast to her studies completed in Glasgow which often featured children living in deprived areas.

Watercolour and chalk on paper