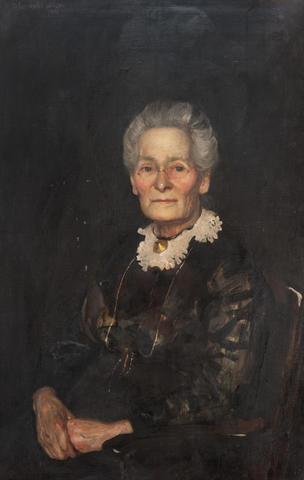 Born in Glasgow, 4th Apr 1873, the son of John Wilson, a lithographer. Died Islay on 8 or 9 Jan 1950. Educated at a private seminary before transferring to Gorbals Public School. Held a business appointment with the firm of Messrs. John Blair & Co., Howard St. before starting at GSA, 1892-3 and then 1899-1906, under the Belgian Symbolist, Jean Delville.
Joined the staff in 1903 as a teaching assistant under Jean Delville, won the Haldane Scholarship and travelled in 1905 to France, Italy, Belgium and London. Returned to GSA and gradually worked his way up to Asst. Professor under Maurice Greiffenhagen, the subsequent Head of Drawing and Painting. On Greiffenhagen’s retirement in 1928 Wilson managed the department while the then Director of the School, John D. Revel, acted as Head. When Revel left the School in 1932, Wilson was formally acknowledged as Head of the Department, a post he held until 1938.
Specialised in portraits and large decorative panels and was commissioned to paint one of a series of large decorative panels in the banqueting hall of the Glasgow Municipal Buildings. He also painted landscapes and figures. Lived in Milngavie most of his life, later moving to Glasgow and then Ayr.
Wilson exhibited at the Royal Glasgow Institute from 1895-1950. From the RGI catalogues it was discovered that "The Wind" was exhibited there in 1919 (number 342 in the catalogue and priced £300). This is probably the first time it was on public show and at a fairly high price compared to Forrester’s other paintings. In the mid-twenties Wilson exhibited a succession of paintings with titles such as "The Song", "The Echo" and so on.
"The Wind" is illustrated in Vol. 5 of the Sotheby's catalogue for the sale of Warhol's estate, held April 29-30 1988. The work was listed as catalogue #2812 with a sales estimate of $10-15,000. It was supposedly one of Andy Warhol’s favourite paintings and this connection has meant that the painting was valued at £250,000 in the 1990s. Warhol also had several other Wilson paintings.