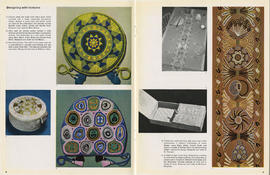 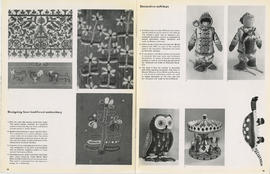 Publications of the Needlework Development Scheme

The publications of the Needlework Development Scheme were central to its aims. The two bulletins, "And So to Sew" and "And So to Embroider" published three times a year, were issued free until 1958 until demand led to a charge being levied for orders of over 24 copies. At its height in the 1950s, the scheme spent the current equivalent (2003) of £1 million printing the bulletin and distributing it primarily to school girls as well as other interested parties. Other publications featured accounts of the Scheme's development along with images of selected needleworks or focused on particular themes within the collection, such as Swedish needlework.

The publications are arranged chronologically.

The Needlework Development Scheme (NDS) was a collaborative project between art and design education and industry. Originally established in Scotland in 1934, its aim was to encourage embroidery and to raise the standard of design in Britain.
Financed by J and P Coats, the thread manufacturers, the Scheme was organised by the four Scottish art schools, Aberdeen, Dundee, Edinburgh and Glasgow. Its collection of foreign and British embroidery was available to domestic science and training colleges, women's institutions and schools, as well as art schools. By 1939, the Scheme had acquired some 900 embroideries but the outbreak of WWII closed the Scheme and the collection was retained by the four original art schools.
Glasgow School of Art was instrumental in re-starting the Scheme late in 1944. Its aims were the same as its predecessor, but expanded its remit to include other arts schools in the United Kingdom where embroidery was taught.In the years following the WWII, the Scheme became centralised and staffed with a qualified embroidery expert, a secretary and several practitioners. The Scheme commissioned the British designer Mary Kessell to prepare designs to be interpreted by embroidery artists in Britain, as the best needlework examples in the collection were foreign. The result was a touring exhibition of work by the Bromley College in London.
The scheme was disbanded in 1961 when funding was withdrawn, although it was recognised that the NDS had achieved its aims. The NDS had amassed 3000 textile items by this time, which were divided and distributed around universities, art schools, organisations and museums including the National Museum of Scotland, the Embroideries Guild and the V&A.

DC 076/21: There are NDS publications within the Dorothy Smith collection