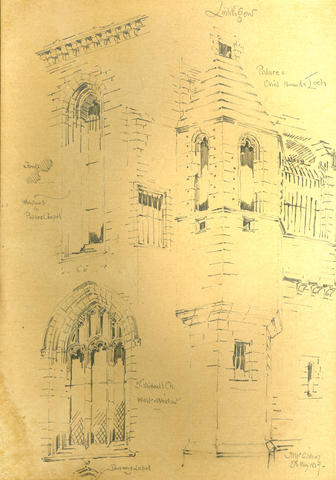 Perspective drawings of Linlithgow Palace and St. Michael's Church, Linlithgow. The upper left and right perspectives depict the windows of the palace chapel and the oriel towards the loch at Linlithgow Palace. The lower left perspective depicts the west window of St. Michael's Church. The drawing bears the stamp of the Glasgow School of Art Library. This item was damaged in the fire in GSA's Mackintosh Building on 23rd May 2014. Paper conservation was completed in 2019.