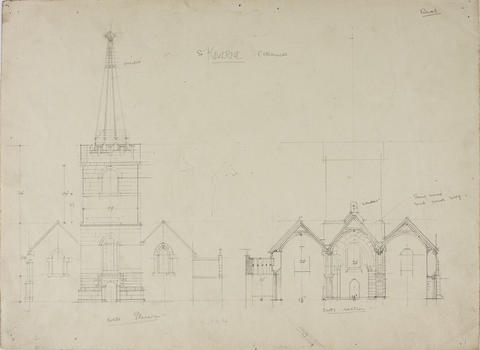 John D Revel was born in Dundee in 1884. He studied at Dundee School of Art, becoming an Art Pupil Teacher. After qualifying as a teacher he taught for two years in Shipley, Yorkshire before becoming the Principal Teacher of architecture in Preston, Lancashire. In 1906 he gained an open Scholarship to the RCA and in 1911 left the College with a degree in architecture, a degree in painting and the award of a travelling Scholarship for painting. After a year abroad he was offered and took up the post of Headmaster at Chelsea School of Art. He also saw service in the First World War in Mesopotamia and India, becoming an official artist to the Expeditionary Force (water-colour paintings survive from this time). He specialised in portraiture and landscape. Revel was elected a member of the International Society of Painters, the Royal Portrait Society and the Royal Institute of Oil Painters. In 1925 he took up the post of Director at Glasgow School of Art. Under his directorship the Extension Building (now the Assembly Hall) was built and the School saw an upsurge in student and social events, notably the development of the Student Representative Council, the growth of the Glasgow School of Art Dramatic Club and the birth of the Kinecraft Society. Revel kept up the tradition of teacher/headmaster/director by occasionally taking the architect's drawing class. The degree course in Architecture produced its first graduates during his time as director, quite a few of whom were women. He left the Art School in 1932 under unhappy circumstances, which are still unclear. One story is that he had a breakdown brought on by trauma from his wartime experiences. However it seems more likely that he made enemies on the Board of Governors, by opposing their opinions and policies. Revel returned to England, where he continued to paint and show work regularly in major exhibitions. He died in 1967.