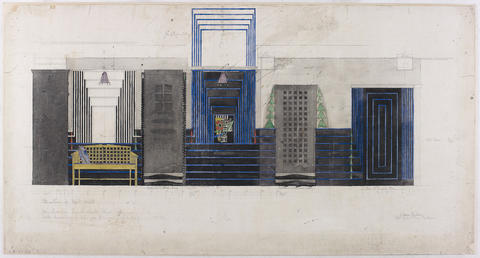 Design for the staircase and vestibule, West Elevation, The Dug-Out, Willow Tea Rooms, Sauchiehall Street, Glasgow. Miss Cranston and her husband Major Cochrane commissioned Mackintosh to redesign the interiors of their home Hous'hill at Nitshill. Mackintosh designed several suites of furniture in 1904 and more pieces in 1909. Stripes are the dominant motif in the decorations, in the panels over the settle and between the doors where they are carried over the ceiling as in the guest bedroom at 78 Derngate. The lampshades are also similar to those used in this bedroom. (Roger Billcliffe). The lattice work recalls the hall at Derngate, but here it is used as an open screen rather than with solid or glazed panels. The only furniture that has been traced is the chair at the writing desk and the small table.

By the end of the 19th century Glasgow School of Art was one of the leading art academies in Europe and after early success in the fine arts, the late 1890s saw Glasgow’s reputation in architecture and the decorative arts reach an all time high. At the very heart of this success was a talented young architect and designer, Charles Rennie Mackintosh whose reputation was to quickly spread beyond his native city and who, over a century later, is still regarded as the father of Glasgow Style.

Born in Glasgow on 7 June 1868, Mackintosh was apprenticed to a local architect John Hutchison, but in 1889 he transferred to the larger, more established city practice of Honeyman and Keppie.
To complement his architectural apprenticeship, Mackintosh enrolled for evening classes at the Glasgow School of Art where he pursued various drawing programmes. Here under the watchful eye of the headmaster Francis Newbery, his talents flourished and in the School’s library he was able to consult the latest architecture and design journals becoming increasingly aware of his contemporaries both at home and abroad. He won numerous student prizes and competitions including the prestigious Alexander Thomson Travelling Studentship in 1890 that allowed him to undertake an architectural tour of Italy.

Back in Glasgow, Mackintosh’s projects for Honeyman and Keppie during the early 1890s displayed an increased maturity. His design for the Glasgow Herald Building (1894) incorporated some cutting-edge technology including a hydro-pneumatic lift and fire-resistant diatomite concrete flooring. Later at Martyr’s Public School (1895), despite a somewhat restricted brief, he was able to introduce some elaborate but controlled detailing including the central roof trusses.

At a public lecture on architecture in 1893, Mackintosh argued that architects and designers be given greater artistic freedom and independence. He himself began to experiment with a range of decorative forms, producing designs for furniture, metalwork and the graphic arts (including highly stylised posters and watercolours), often in partnership with his friend and colleague at Honeyman and Keppie, Herbert MacNair and two fellow students, Margaret and Frances Macdonald.

In 1896 Mackintosh gained his most substantial commission, to design a new building for the Glasgow School of Art. This was to be his masterwork. Significantly, the building was constructed in two distinct phases, 1897-99 and 1907-09, due to a lack of money. Stylistically, the substantial delay in completion offered Mackintosh the opportunity to amend and fully integrate his original design (of 1896) which owed much to Scotland’s earlier baronial tradition with a second half to the building that looked very much to the 20th century through its use of materials and technology. Most dramatic of all the interiors was the new Library (completed in 1909), which was a complex space of timber posts and beams. Its construction owed much to traditional Japanese domestic interiors but ultimately the building was an eclectic mix of styles and influences.

In Europe the originality of Mackintosh’s style was quickly appreciated and in Germany, and particularly in Austria, he received the acclaim and recognition for his designs that he was never truly to gain at home. He contributed to the 8th Vienna Secession and participated in international exhibitions in Turin, Moscow and elsewhere. He entered an open competition to design ‘A House for an Art Lover’, put forward by a German design journal, Zeitschrift fur Innendekoration, in 1900. Although he failed to win the competition, his architectural designs were judged to be of such a high standard that they were later reproduced as a portfolio of prints.

Back in Scotland at The Hill House in Helensburgh (1904), the publisher Walter Blackie commissioned Mackintosh to design a substantial family home. In its appearance, it owed much to his House for an Art Lover designs and an earlier completed domestic commission, Windyhill (1900). Externally, The Hill House was notable for its simple and solid massed forms with little ornamentation, yet internally the rooms exuded light and space, and the use of colour and decoration was carefully conceived.

Throughout his career Mackintosh relied on just a handful of patrons and supporters. The Glasgow businesswoman Catherine Cranston proved to be one of his most influential and her series of tearoom interiors (designed and furnished between 1896-1917) provided him with a virtual freedom to experiment. Responsible for their ‘total design’ Mackintosh provided the tearooms with furniture (including the dramatic high-back chairs), light fittings, wall decorations and even the cutlery.

Despite success in Europe and the support of clients such as Blackie and Cranston, Mackintosh’s work met with considerable indifference at home and his career soon declined. Few private clients were sufficiently sympathetic to want his ‘total design’ of house and interior. He entered the competition to design a cathedral for the City of Liverpool (1902) but although his design showed a Gothic quality as requested, his entry was rejected and his design for Scotland Street School (1906) in Glasgow was to be his last public commission.

By 1914 Mackintosh had despaired of ever receiving the level of recognition in Glasgow that he felt he deserved. He became increasingly obstinate and incapable of compromise and it is known that this exerted unnecessary pressures on his colleagues. In an attempt to resurrect his career, Mackintosh resigned from the practice and with his wife Margaret Macdonald moved to London.

This was unfortunate timing, for with the onset of the First World War all building work was severely restricted. Adventurous plans for a suite of artists’ studios and a theatre were never built. However, after making adjustments to the exterior of a mid-terraced house at 78 Derngate in Northampton (1916), the client W J Bassett-Lowke commissioned Mackintosh to redecorate a number of the building’s interiors including the Guests’ Bedroom (1919). These designs show him working in a bold new style of decoration and construction, using primary colours and geometric motifs. It was an output of extraordinary vitality and originality but it went virtually unheeded.

A move to the South of France in 1923 signalled the end of Mackintosh’s three-dimensional career and the last years of his life were spent painting. He died in London on 10 December 1928.

Pencil and watercolour on paper