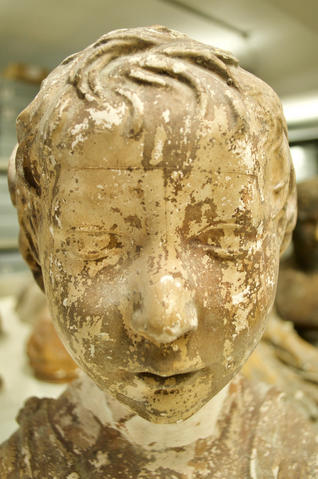 J. Giusti & Co. was a Glasgow-based business active from the late 19th to the early 21st century specializing in plaster work and mould making. The firm was likely founded by one of the Giusti Brothers who are listed in an 1871 census residing at 130 Hospital Street, Glasgow: Calelo Giusti (born c.1843), Giuseppie (sic.) Giusti (born c.1844) and Gamalielo Giusti (born c.1847). The three brothers are listed in the census as “stucco image makers.”
The family seems to have started two separate businesses, both of which are recorded in the Glasgow Post-Office Annual Directory, 1884-85.  One business, “Giusti Brothers,” is listed as “figure makers” and operated at 7 South Coburg St. The other business, “J. Giusti” is listed as “plaster modeller” and operated at 87 Bothwell St. The two Giusti businesses continued to operate for several years, and by 1886 “J. Giusti” was expanded to “J. Giusti & Co.” By 1889, only the J. Giusti & Co. business was listed in the Post-Office Directory, but under two locations. The first location at 328 South Vincent St. is listed under “Modellers,” and the second location at 87 Bothwell St. is listed under “Modellers (In Wood).”
J. Giusti & Co. engaged in a several enterprises outside of their work with plaster. The company is also described as confectioners in 1899 and later, from 1902 until at least 1910, as wine and Italian merchants. However, the company's longest business interest was in the production of plaster moulds as well as the sale and repair of plaster casts.
Records from the Glasgow School of Art Board of Governors indicate that the school purchased plaster casts from J. Giusti & Co. and hired the company to make plaster reproductions of student work as early as 1890. The company was hired to repair plaster casts at the GSA as early as 1891 and was hired for the same purpose through 1996 when the company performed repair work on the Winged Victory of Samothrace.
In the mid-20th century the company was purchased by the Gaggini family. They continued to operate under the business name J. Giusti & Co., and described themselves as “statuary and cornice repair, moulders and figure makers.” Throughout much of the 20th century the company supplied local schools and churches with plaster casts and operated a retail shop selling plaster objects at least through the mid-1970s. After the business closed, members of the Gaggini family continued to repair statuary, work with plaster, and supply plaster casts until as recently as 2016.