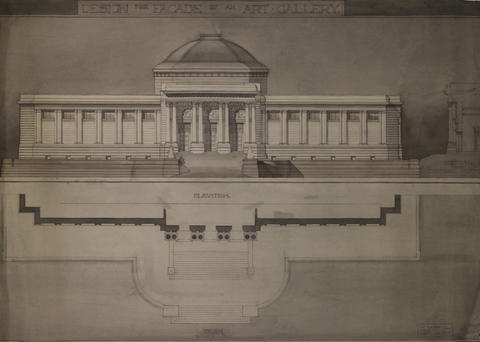 Kenneth Murray Fraser was born on 19 October 1906, the son of Dr John Hosack Fraser, a medical practitioner who was in charge of the Keir Auxilliary Red Cross Hospital throughout WW1. He was awarded the War Medal of the British Red Cross by Queen Alexandra, and the Medaille du Roi Albert by the King of the Belgium. His wife, Christina Reid, and he had 5 sons & 3 daughters.
From 1924-1929 Kenneth Fraser served his articles with Stewart & Paterson while at the same time taking the certificate course at Glasgow School of Art and the Royal Technical College. After the completion of his articles he remained with Stewart & Paterson as an assistant but left to undertake war service in August 1940.
In his Nomination Paper he does not specify the reason but his war service finished in June 1941. He then was required to carry out War Damage work, as Architect in "reserved profession". He was also a Special Constable. He then took a post as senior assistant (later deputy chief assistant) with Sam Bunton Associates. Subsequent to wide general experience he served on the War Damages Staff with Sam Bunton who was architect and town planning consultant to Clydebank Town Council in the early 1940s. Following completion of this he continued with staff engaged on the reconstruction and development of the entire burgh, involving about 4000 houses as well as communal and public buildings. He remained with Bunton and was admitted LRIBA in 1948, proposed by Jack Coia, John Stewart and William McCrea.
At this time he was engaged on the development of the burgh which includes an extension of about 600 acres with 5000 houses. By this date he had gained wide experience and knowledge of Local Authority housing using traditional and non-traditional methods. At some point he became an Associate with Sam Bunton. Later he formed a partnership with James Hastie MacLeod as MacLeod & Fraser. By 1974 he had retired from business and wished to resign from RIBA.
He was married to Bridget Hughes (1910-2003) and had one son, John Kenneth Fraser (born 1943, RICS Scotland Chair 2002/3). His best man was also an Architect (John (Jack) Allan), who worked with him at Sam Bunton's and may have been at GSA. Another contemporary, who may have been at GSA was Sheila Neil O'Shaughnessy, an artist and great friend of the family.
He died on 26 December 1988 at Gartnavel Hospital in Glasgow.

Pencil and ink wash on paper.