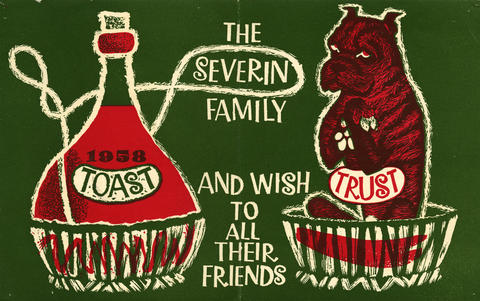 Dog and flask of wine.

Mark Fernand Severin (5 January 1906 at Ixelles, Belgium - 10 September 1987 at Uccle, Belgium) was a Belgian-born artist and graphic designer who lived in England for most of his life.Mark Severin was the son of Fernand Severin (1876–1931), a poet. Described as one of the most outstanding engravers of his generation, Mark Severin specialised in fine miniature work, including postage stamps and book illustrations. He made close to five hundred bookplates, of which a great number are on erotic subjects. He was also active as an advertisement designer in Great Britain, including posters for Imperial Airways and the London Underground. In 1935, Severin married Nina Holme, a children's book illustrator, daughter of Charles Geoffrey Holme, editor of The Studio, an illustrated fine arts and decorative arts magazine founded and, until 1919, edited by his father, Charles Holme. Mark and Nina had two sons: Erik and Geoffrey.