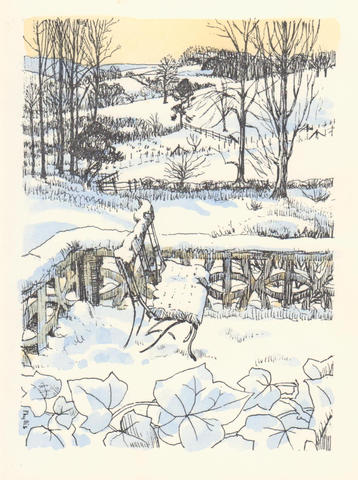 Garden bench in snow. Message inside.

Douglas Percy Bliss was born on 28 January 1900 in Karachi, India. He was educated at Watson's College, Edinburgh, 1912-1918, and at Edinburgh University, 1918-1922. He studied painting at the RCA under Sir William Rothenstein, 1922-1925, receiving an Associateship. From 1932 Bliss was a part-time tutor at the Hornsey School of Art and then at the Blackheath School of Art. During the Second World War he served in the RAF, at one point being posted to Scotland.
He was Director of Glasgow School of Art from 1946 to 1964 and under his guidance the School saw a re-emergence of the importance of design and the creation of the three new or reconstituted departments of Interior, Textile, and Industrial Design, raising them to the status of Diploma subjects, and providing them with fully equipped workshops. He strove to bring figures from London to teach, and those that came to Glasgow included Gilbert Spencer (formerly of the RCA and the brother of Stanley Spencer) and Eric Horstmann. Whilst in Glasgow he worked to save the Mackintosh tea-rooms, enlisting people such as Nikolaus Pevsner and John Betjeman to support the campaign and he was tireless in encouraging critical appreciation of the city's architecture. When Bliss left Glasgow School of Art in 1964 the School was listed in Whitaker's Almanac as among the six highest-ranking Art Schools in Britain.
Bliss was well known as a wood engraver and as a historian of wood engraving, although he was also known as a painter of watercolour landscapes. He selected and engraved Border Ballads for Oxford University Press in 1925 and wrote his History of Wood Engraving in 1928. He also illustrated many books throughout his lifetime before returning to painting watercolours in the 1980s. He was elected a member of the SWE 1934, and RBA 1939. He retired to Windley Cottage near Derby and was soon invited to become a Governor of the local art college, Derby School of Art. Bliss died on 11 March 1984.

Phyllis Dodd studied at the Liverpool School of Art before moving to the Royal College in London where her future husband Douglas Percy Bliss was also to study. The couple married in 1928 and in 1945 moved to Glasgow when Percy Bliss was appointed Director of the Glasgow School of Art. She was a prolific artist and specialised in portraiture.