Collection DC 027 - Letter of congratulations to The Glasgow School of Art from John Byrne, artist 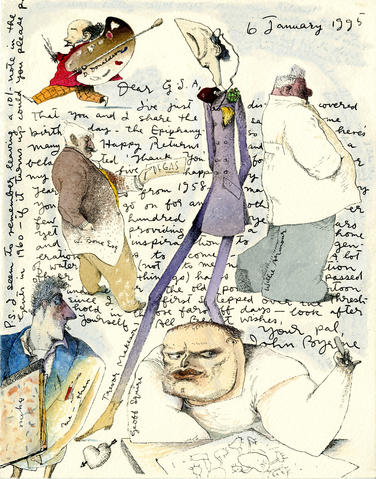 Letter of congratulations to The Glasgow School of Art from John Byrne, artist

An A4 size letter featuring watercolour paintings commemorating the 150th anniversary of the Glasgow School of Art , 6 January 1995.

The item is arranged as it was deposited.

John Byrne has gone on to become a successful television and theatre writer, painter and illustrator. In the 1960s and 1970s he produced a number of naive, dream-like paintings influenced by Douanier Rousseau which he signed 'Patrick'. These works reveal great technical mastery and have become symbols of the pop music of the era, especially his portrait of the Beatles painted for The Illustrated Beatles Lyrics. He also painted a portrait of comedian Billy Connolly and produced several influential records sleeves.

A master of many styles, Byrne is also a capable still life and portrait painter in a more traditional manner.