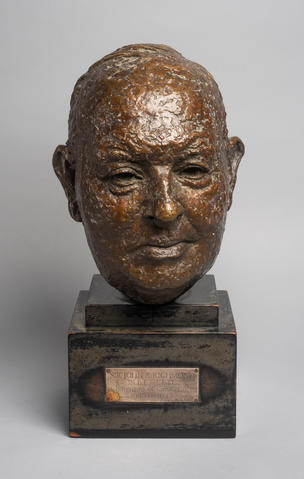 Benno Schotz was born on the 28th of August 1891, to a family of watchmakers in Estonia. In 1911 he left his homeland to begin studying engineering in Darmstadt, Germany before emigrating to Glasgow, transferring to Royal Technical College where he gained an engineering diploma. From 1914 to 1923 he worked in the drawing office of John Brown and Company, a Clydebank shipbuilders, while attending evening classes in Sculpture, including Modelling and Stonemasonry, at The Glasgow School of Art from 1914-1921. During the 1914-15 session Schotz received a bursary from The City Educationall Endowments Board worth £3.

In 1920 he was elected President of the Society of Painters and Sculptors, Glasgow, and three years later he became a sculptor full time with his first solo exhibition held at Reid and Lefevre’s in 1926. Later he went on to teach at The Glasgow School of Art, becoming the Head of Sculpture in 1938-1962. He was also appointed Her Majesty's Sculptor in Ordinary for Scotland, 1938.

A variety of his sandstone sculptures adorn building and bridges across Glasgow, details and locations of which can be found in Sculpture in Glasgow: an illustrated handbook and Public Sculpture of Glasgow, both by Ray McKenzie, available in The Glasgow School of Art Archives.