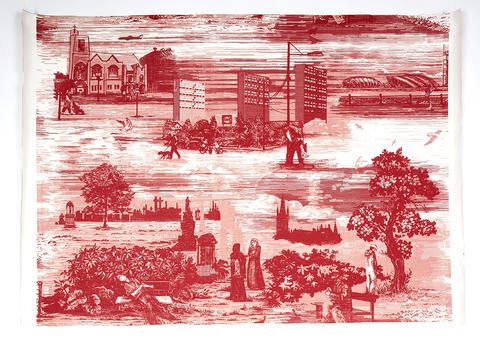 Established in Glasgow in 1990, Timorous Beasties is a design-led manufacturing company that specialises in fabrics and wallpapers. It was set up by Alistair McAuley and Paul Simmons, who both studied Printed Textiles at the GSA, and graduated in 1988.

Recognised for its surreal and provocative designs drawn from nature, the company’s best-known patterns include the Thistle range, which echoes the golden age of copperplate engraving, and the Glasgow Toile, which uses gritty, urban images in place of traditional pastoral scenes.

In addition to producing its own product range, Timorous Beasties has collaborated with other manufacturers such as Brintons carpets and Ercol furniture, and has applied its designs across a range of print, packaging, furnishings and interiors. Notable projects include a series of book cover designs for Penguin, illustrations for banknotes for the Royal Bank of Scotland and tail-wraps for the private business jet company, Netjets, for the Challenger 305 series