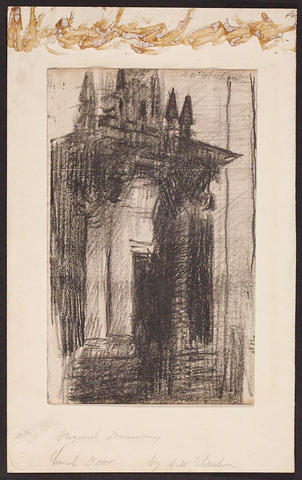 Archibald McGlashan was born in Paisley, Renfrewshire, Scotland, in 1888 and worked as an engineer before deciding to become an artist. He studied at the Glasgow School of Art, Glasgow, Scotland between 1906-1915, where he was awarded the Haldane Travelling Scholarship in 1912. He worked in Glasgow and later Edinburgh and London, becoming a popular and successful artist, particularly of children. He was a founding member of the Glasgow Society of Painters & Sculptors, a member of the Royal Scottish Academy and exhibited with the Society of Eight in Edinburgh with Lavery, Peploe, William McTaggart, Cadell and others. He taught evening classes at the Glasgow School of Art from 1938.

pencil and black chalk on paper