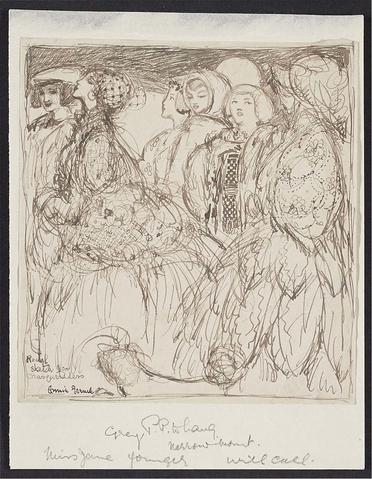 Group of women in flowing dresses.

Annie [Anne] French (1872–1965) was an illustrator who used a fine linear technique. Born at 5 Calder Street, Govan, Glasgow, on 6 February 1872, she was the daughter of Andrew French, a colliery clerk and later metallurgist, and his wife, Margaret Weir. With her interest in art encouraged by her family, she became a student at the Glasgow School of Art from 1886 to 1902 and returned in 1907 to teach at the school in the department of ceramic decoration till 1912. Her black and white illustrative work, for example The Picture Book (reproduced in The Studio, 14 July 1906) and The Plumed Hat (c.1900; reproduced in Burkhauser, 142), shows some similarity in style to that of Aubrey Beardsley: it was imaginative and full of fantasy, but was little published although well reviewed in the prestigious art journal The Studio. In 1914 she married the ceramic artist George Wooliscroft Rhead (1867–1920) and settled in London. She died at The Limes, a nursing home in St Helier, Jersey, on 27 January 1965. Examples of her work are held in private collections and a few are in the collection of Glasgow Museums and Art Galleries.

brown pen and ink on paper