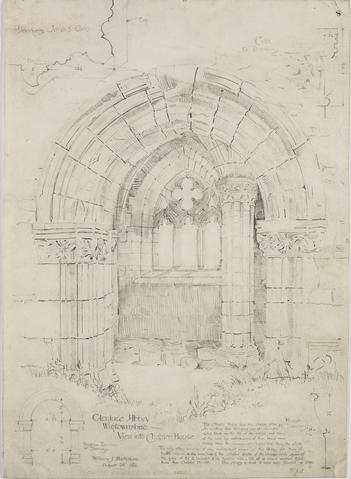 William James Anderson was born at 17 Bell Street, Dundee, on 22 November 1863, the son of James Anderson, tea dealer, and his wife Margaret Steel. In August 1877 he was articled to James Gillespie of St Andrews, obtaining a place in the Edinburgh office of Robert Rowand Anderson and George Washington Browne. There he worked on Glasgow Central Station and other high-quality projects until about 1883 when he moved to Glasgow as chief assistant to Thomas Lennox Watson. While there he studied at Glasgow School of Art for sessions 1884-85 and 1886-89, and in 1887 he won the Alexander Thomson Travelling Scholarship which enabled him to spend five months in Italy in 1888. These studies were immediately reflected in the high-quality Renaissance detail of the ground floor of Watson's Citizen Building in St Vincent Place. In the following year he transferred to William Leiper's office to assist him with the equally high-quality detailing of the Sun Insurance Building, but the directories suggest that Leiper may have allowed him to commence a small private practice from his home at 62 Cadder Street, Pollokshields, to which he had moved from 10 Albert Drive Crosshill c1886-87.
In 1890 Anderson published his Thomson Scholarship drawings as 'Architectural Studies in Italy' and became president of the Glasgow Architectural Association. In the following year he left Leiper's and commenced his own practice at 136 Wellington Street with his younger brother Alexander Ellis Anderson (b.1866) as assistant, and secured elevation as ARIBA on 5 June 1893, having passed the qualifying examination. His proposers were William Leiper, Leiper's close friend W Forrest Salmon and Watson. There was not a lot of business in the first year or so but the Governors of Glasgow School of Art commissioned a series of seven lectures delivered at the Corporation Galleries in 1893-94 on the architecture of the Italian Renaissance as part of a Beaux-Arts inspired 'study the classics' programme for its architectural students. Of these lectures five were published by BT Batsford as 'The Architecture of the Renaissance in Italy' while the two introductory lectures were developed into a course on the history and development of Greek architecture followed by three lectures on Roman architecture, delivered in 1896-97. These were then put into book form as 'The Architecture of Greece and Rome' which was completed by R Phené Spiers and published by Batsford in 1902. As director he gave a further course on the various styles of architecture down to that time, and in the winter of 1898-99 he gave a further course dealing with the Renaissance in France. These he intended to develop into a third volume, but the texts were found not to be sufficiently complete for publication and eventually at the suggestion of Sir john W Simpson, Batsford commisioned a totally new book from W H Ward, published in 1911.
These scholarly activities and Anderson's fine draughtsmanship resulted in Anderson's appointment as Director of the Architectural Department at Glasgow School of Art in 1894 at the early age of thirty. This appointment gave him sufficient security to marry Agnes Inglis Dundas at the Cockburn Hotel, Glasgow, on 12 September and move house from 27 Westmorland Terrace (to which he had moved c1892) to 7 Waverley Gardens, followed by a further move to 1 Marlborough Gardens, Cathcart. The practice itself moved to 95 Bath Street, where he took chambers adjacent to those of Alexander Nisbet Paterson with whom he shared a single apprentice, Alexander David Hislop. Anderson's principal client was The Fireproof Building Company, the principal of which was a Mr Orr, a pioneer of pre-Hennebique reinforced concrete construction based on the use of steel beams, old rails and barbed wire. Orr was his own structural engineer and Anderson's superintendence correspondingly limited. In 1898 there was a partial collapse of the floors of Napier House in Govan Road which killed five of the men working on it. At the inquest the jury found that insufficient steel beams had been specified for the floors, but Hislop and Anderson's friend Alexander Wright's recollection was that the collapse resulted from a combination of a bad mix in the concrete and too early removal of the shuttering. Anderson suffered a nervous breakdown and had to become a patient at Gartnavel where he committed suicide with a razor on the evening of 25 March 1900. He was survived by his wife and an infant son who subsequently emigrated to Canada. His moveable estate amounted to £312 lls lld.
Shortly before his death, in or about 1899, Anderson appears to have formed a brief partnership with William Leiper for the commission for the interior work for SS Regele Carol I for the 'Roumanian Government'. It was run from Anderson's office at 95 Bath Street. As Anderson was in the middle of the Napier House inquest, Leiper must have been helping his former assistant with this particular job. Indeed it may have been that by this stage Anderson had been committed to Gartnavel Asylum and that Leiper stepped in to assist with all Anderson's jobs.