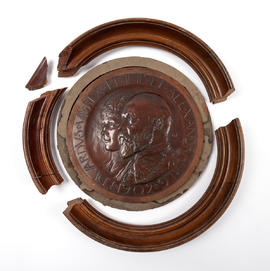 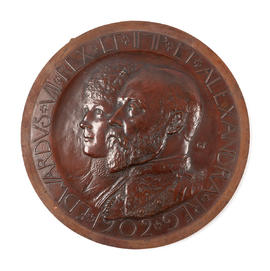 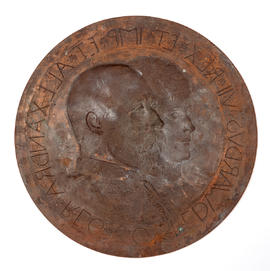 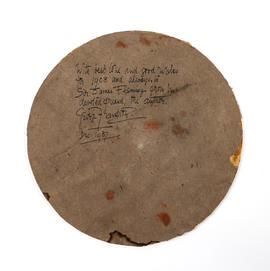 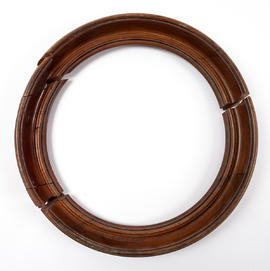 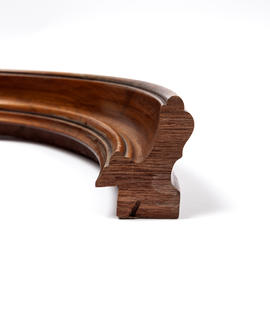 Born in London. He was the second son of James Frampton (born c1835 in London), wood and stone carver. In 1878 George worked as a stone carver on the Hotel de Ville in Paris. He then returned to London and studied first at the South London Technical School of Art (1880-1) and then at the Royal Academy Schools (1881-7). During this time he completed several commissions for decorative and ornamental sculpture. Frampton also created a number of architectural works, including decoration for the facades of the Chelsea Conservative Club (c.1885) and the Constitutional Club in Northumberland Avenue (1885–6), both destroyed. After leaving the RA Schools, Frampton went to Paris and studied sculpture under Antonin Mercié (1845-1916) and painting with Pascal Adolphe Jean Dagnan-Bouveret (1852-1929) and Gustave Courtois (1853-1923). On his return to London he worked briefly as an assistant to Sir Joseph Edgar Boehm. From the early 1890s Frampton's works increasingly fused sculpture and the decorative arts. Many of the pieces combined several different materials, such as bronze and marble in his statue of Dame Alice Owen (1897) for the School of this name in Islington, London (now in Potters Bar, Hertfordshire). Frampton also exhibited with the symbolists on a number of occasions, notably at the Venice Biennale of 1897, La Libre Esthétique in Brussels, and the first Vienna Secession in 1897. His career was outstandingly successful and he received numerous honours for his achievements, including being made an honorary LLD at St Andrews University (1894) and a member of the Royal Fine Arts Commission from its foundation in 1924. In return, Frampton was generous to younger sculptors and gave his time freely to students as one of the directors of the Central School of Art (1890s) and as a Visitor to the Royal Academy Schools. He also sat on numerous committees and supported a range of art societies. George married the painter Christabel Cockerell (1863-1951) in April 1893. She had an active career both before and after her marriage, exhibiting at the Royal Academy between 1885-1910. They had one son, the painter Meredith Frampton (1894–1984).