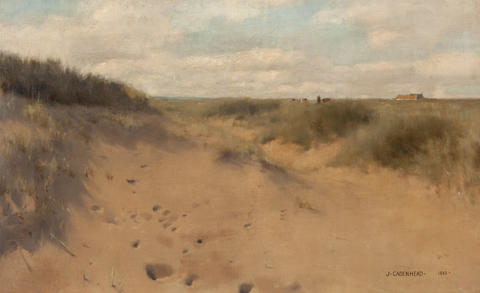 This item was lost in the fire in The Mackintosh Building at The Glasgow School of Art on 23rd May 2014. Landscape study of sand dunes.

Cadenhead was a Scottish landscape and portrait painter. He was born in Aberdeen, the only son of the procurator-fiscal, and received his early training in art in that city, showing an aptitude for black and white drawing, etching and portraiture. He was encouraged in his art endeavours by Dr. John Forbes White (art collector and photographer, and brother-in-law of surgeon and photographer, Thomas Keith) who aroused his interest in the old masters, and artists of the French Barbizon and modern Dutch schools. He went on to the Royal Scottish Academy schools in Edinburgh, then, in 1882, to Paris to study at the atelier of Carolus-Duran. There he was also strongly influenced by the work of Jean Charles Cazin (1840-1901).
Cadenhead returned to Aberdeen in 1884, moving to Edinburgh in 1891. In 1893, he was elected a member of the Royal Scottish Society of Painters in Watercolour, and in 1902 was made an Associate of the Royal Scottish Academy. He became Chairman of the Society of Scottish Artists, and was one of the original committee of the Scottish Modern Arts Association. He exhibited regularly at the Royal Scottish Academy and Royal Glasgow Institute of the Fine Arts, and was elected a Scottish Royal Academician in 1921. Amongst his portraits is one of his mother entitled "Lady with Japanese Screen and Goldfish" (1886, City Art Gallery, Edinburgh). Cadenhead died in Edinburgh in 1927.