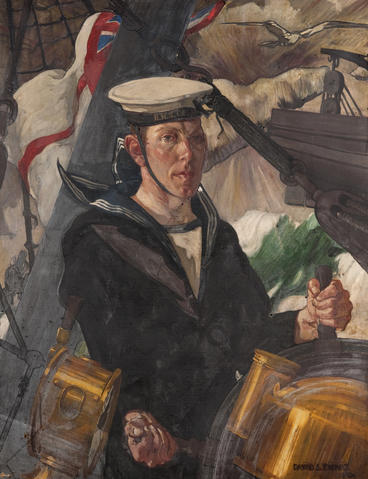 This item was lost in the fire in The Mackintosh Building at The Glasgow School of Art on 23rd May 2014. Portrait of sailor.

David Shanks Ewart was born on the 21st of December in 1901. He studied at The Glasgow School of Art from 1918 to 1924. He was born in Shettleston and spent a year in business before entering the School under Maurice Greiffenhagen and Francis Newbery in 1918. During his studies, he was awarded a travelling scholarship enabling him to study in France and Italy. Shortly after his return he received the Guthrie Award in 1926, and the Lauder Award 1927. In his early years painted mainly the scenery of the Cuillins, Loch Coruisk in Skye and the three sisters of Glencoe, but he soon concentrated on portraiture. He was a member of Glasgow Art Club in 1925. He visited the US between 1946 and 1964, for six months each year he painted portraits of wealthy industrialists and their wives. He was elected ARSA in 1934. He exhibited 80 portraits at the RSA. He lived in Glasgow all his life and died on the 13th of October 1965. If you have any more information please get in touch.