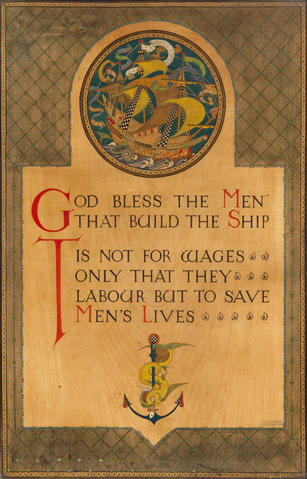 This item was lost in the fire in The Mackintosh Building at The Glasgow School of Art on 23rd May 2014. Decorative panel with lettering: Script reads: God Bless The Men That Build The Ship/Tis Not For Wages/Only That They/Labour But To Save/Men's Lives.'.

Ailsa Craig Ailsa Margaret Alexander Craig was born on 12 July, 1895 in Dumfries, where her father, William Thomson Craig (born ca. 1861) was working as a solicitor. He is listed in the 1891 census as living at 58 Irish Street with his wife Margaret Alexander Craig, nee McTurk (born ca. 1868) The couple had married just a year earlier in Market Harborough, Margaret’s home town. By the time of the 1901 census, the family – now including two daughters, Ailsa and her elder sister Jean (born ca 1894) - had moved to Cambuslang, where their address was, ‘The Maynasards, Brownside Road’. William’s occupation was now recorded as a ‘Scholar,’ in common with his daughters. Ailsa first enrolled at the School in 1912, giving her address a 3 Foremount Terrace in Dowanhill. She studied Drawing and Painting and continued with this course, switching to Design for the 1914-15 session. From 1915 – 1918 she studied Drawing and Painting again, also enrolling for the evening Life Drawing Class. In 1916, she moved to 9 Minard Road in Partickhill, staying there until the end of her studies. Ailsa was obviously an able student, awarded a Haldane Trust bursary in 1914 and a maintenance bursary the following year. In the 1918 School of Art Annual report she appears on the list of students commissioned to produce rolls of honour, in her case for the Scottish Mine Owners Defence and Mutual Assurance Association Ltd. Interestingly, the 1912 Post Office Directory lists the Solicitor to this company as a W.T. Craig – presumably Ailsa’s father. The offices of the Association were at number 53 Bothwell Street in Glasgow, but sadly, there seems to be no trace of the work that Ailsa produced. From 1931 to 1939 Ailsa Craig was a member of GSA staff, teaching Lettering and Illumination and a course in the History of Illumination. A member of the Glasgow Society of Lady Artists, she exhibited widely and in 1948, her book “The Design & Spacing of Lettering” was published by Blackie and Son, recognised as the authoritative work on the history of the subject. This was recognised as the definitive work on the subject at the time. In later years, she lived in Bridge of Allan, near her Dunblane based friends and fellow GSA alumni, Helen and Mildred Lamb.

Oil on wooden-framed board