Elevation, section and plan drawings of a design for a villa. The design appears to be an interpretation of the Villa Pigneto del Marchese Sacchetti. The project may have been to draw the ruined villa based on evidence from previous artist impressions. The drawing is not dated but is part of Kenneth Murray Fraser's student work at the Glasgow School of Art.

Study of the Nose

A study of the nose, drawn during High School. 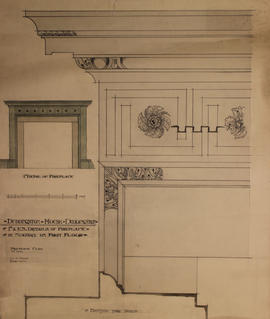 Contains life drawings by Kenneth Murray Fraser, completed during High School and at the Glasgow School of Art.

Sketch of a Sculpture

2nd year drawing depicting a sculpture of an angel.

Undated sketch of a figure, likely from Kenneth Murray Fraser's time at the Glasgow School of Art.

2nd year drawing depicting the outline of a sitting figure. The back of the paper contains some unrelated calculations.

2nd year drawing depicting the back of a figure.

The drawing depicts a design for a series of flats to accommodate 1926 people, with labelled information on the varying density of the blocks. The blocks range between 22, 4, and 2 storey flats. The project is credited to "SCM". Sam Bunton & Associates are credited as consultant architects, while John A. McGregor is referenced as a planning consultant. Kenneth Murray Fraser may have been involved in the project or drawing as an assistant at Sam Bunton & Associates. The project is presumed to be dated after 1960, when Sam Bunton was employed as a consultant architect for the production of multi-storey flats in Glasgow; during the 1960s, architects were also requested to aid in the production of multi-storey flats and redevelopment of areas in Motherwell.

Collection of drawings relating to the student and commerical work of Kenneth Murray Fraser and his brother, fellow architect James Lovat Hosack Fraser.

Drawing of the exterior of a Graeco-Roman monument. Portion of the bottom of the image has been removed. 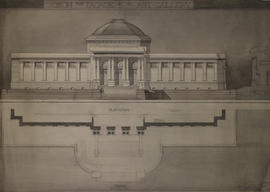 East End of a City Church

East End of a City Church

Design for an Early English Cathedral

Design for an Early English Cathedral

Drawings of loggia designs. The items may not be for the same project as the designs are different, but possibly represent a developed or altered iteration of the same project.

Calculations for Steelwork of a City Warehouse

A collection of calculations for the sizing of elements in a steel-constructed city warehouse design.

Elevation and plan of Bolten House at Grantham. The bottom right corner of the paper has been removed and a photograph of the house taken from a magazine has been attached.

Contains architectural work completed by Kenneth Murray Fraser while a student at the Glasgow School of Art.

Contains two items for the same project, which combined together show four elevations and a plan of a Classical design for a museum.

A plan and elevation drawing.

Contains drawings of the same project with the same elevations and plans depicted. DC088/1/10/2 is a more detailed iteration of the design.

Two sections and a plan drawing.  The drawing is not dated, but can be linked to another dated drawing of a design for a monumental staircase.  There is also evidence of some calculations done in pencil.

The project appears to be primarily concerned with the materiality and measurements of a steel construction for a city warehouse.

A collection of plan, section and elevation drawings.  The drawing is annotated with information on the dimensions of construction elements.