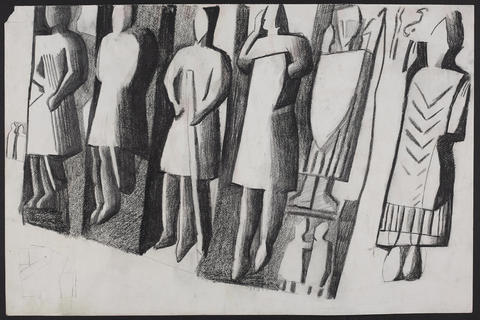 A drawing of standing figurative sculptures in various poses and wearing robes. One figure is holding a shield. Drawn in charcoal pencil on white paper.

Born in the UK in 1960, Fraser Taylor is an interdisciplinary artist who works with a range of media including drawing, painting, sculpture, printmaking and animation. After receiving his bachelor of art in printed textiles from The Glasgow School of Art, Taylor went on to complete his masters in fine art at the Royal College of Art, London.

In 1983 he co-founded ‘The Cloth’, a collaborative studio established to enable artists to move freely between fine art and design projects. The Cloth designed numerous textile collections, which were manufactured in Tokyo, Milan, Paris, London, New York, San Francisco and Los Angeles. They also produced seasonal collections of ready to wear men’s and women’s apparel, which retailed at leading department stores in Europe, Asia and the US. The Cloth disbanded in 1988 to allow each artist to pursue individual direction.

Since 1983, Taylor has exhibited internationally; venues include: Jill George Gallery and StART Space, London; Mackintosh Museum, Glasgow; Gallery Boards, Paris; Galeria Jorge Alcolea, Madrid; Tim Olsen Gallery, Sydney. From 1996 to 2001, he was the assistant curator of ‘Japanese and British Art Now’, an exchange program established to provide a curriculum of exhibitions and workshops, encouraging discourses between artists working in London and Tokyo. This enabled Taylor to participate in group and solo exhibitions, at Axis Gallery, Gallery Aoyama, Sigacho Bis and SPICA Art, in Tokyo.

Since 1983 he has lectured at fine art and design schools including Goldsmiths College University of London, Central St Martin's, The London Institute, The Royal College of Art and The Glasgow School of Art. In 1999 Taylor was invited to take part in a summer program, 'London in Chicago’ at The School of The Art Institute of Chicago, which led to his appointment as Visiting Artist, in the Department of Fiber and Material Studies in 2001. Subsequently Taylor began to exhibit in the US. Venues include: Thomas McCormick Gallery, Bucket Rider Gallery, Alfedena Gallery, mn Gallery, Evanston Arts Center, Hyde Park Art Center, Bowdoin College Museum of Art, Sybaris Gallery, Linda Ross Contemporary and Aurobora Press. Taylor currently lives and works in Chicago.