In Glasgow, the period from the end of the First World War to the 1940s was one of political unrest, economic uncertainly, and yet technological innovation. Strikes and depression in the 1920s and early 1930s were followed by the promise of an industrial revival before the onset of World War II in 1939. These factors are reflected in the activities of GSA, its staff, students, and alumni during this period.

On the one hand, new courses in Communication Design and Industrial Design were established to train students to work in the growing fields of promotion and product development. A new Assembly Building providing increased student facilities was opened in 1929. The period also saw the establishment of the Students Representative Council, an athletics club, and the Kinecraft film society. On the other hand, during the Second World War, there was a sharp reduction in the amount of facilities and materials available to students and work had to be produced with whatever could be found. During peace time, many students took the opportunity to travel and experience the art of other countries. While in 1938, the world came to Glasgow as the city hosted its Empire Exhibition at Bellahouston Park. 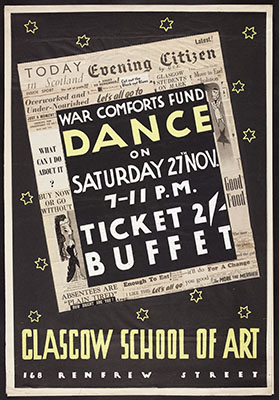 Poster for a War Comforts Fund Dance
by Dorothy Smith, 1944