By the end of the nineteenth century, Glasgow’s reputation as a wealthy, industrial powerhouse was well established and the city’s designers and artists, such as the so-called Glasgow Boys, were beginning to gain recognition. The Glasgow School of Art was growing in success, spurred on by the energy of its charismatic Headmaster, Francis Newbery (1855-1946). The School employed staff from across the UK and Europe to offer the best tuition to its students. Classes were developed to provide hands-on training in textiles, metalwork, and sculpture and, in the early 1900s, a four year diploma course was introduced. In addition to new developments in the curriculum, The Glasgow School of Art Club was active in encouraging students to socialise, sketch, and to put on musical and theatrical events.

This period also saw the development of The Glasgow Style, a distinctive approach to design which used stylised, linear and flowing motifs based on nature. It helped to boost GSA’s international reputation and to support the growing recognition of work by female artists and designers.

The opening of GSA’s new building in 1909, designed by Charles Rennie Mackintosh (1868-1928), is perhaps the most lasting legacy from this period.

Unfortunately, the outbreak of the First World War severely slowed down developments at the School as many students and staff left to undertake war work. The experience of these individuals can often be seen in the art work they produced during and after the conflict. In 1916, one of GSA’s alumni, Muirhead Bone (1876-1953), was appointed the UK’s first official war artist. 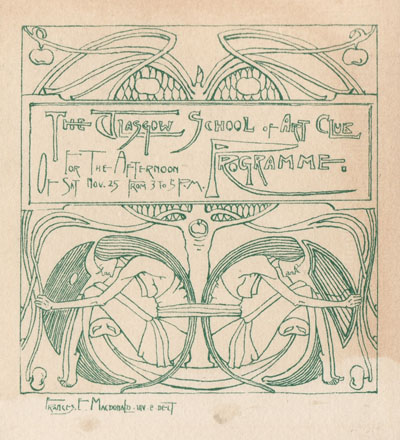 Design for a Glasgow School of Art programme
by Frances Macdonald MacNair, 1893